From his first ever stint in the G League with the Grand Rapids Gold and Head Coach Jason Terry at the Winter Showcase, to signing a 10-day hardship contract where it all started with the Miami HEAT. It’s been a lot to digest, no matter if you’re a 10-year NBA veteran, or not.

“My life has been crazy the last month, or even more. There has been so much going on, so fast,” Chalmers expressed. I have been through a lot in my playing career. But this has been a lot to take in. ”

The latest turn in his roller coaster ride is a stint back in the G League, but with the organization he got his start, grew into a man, and won championships with.

“It feels good to be back playing inside the HEAT family,” Chalmers said of the reunion. “It’s been a long time coming, especially for me. I was just happy to be back and happy to be still working towards my goal with the family again. It just feels right.”

Chalmers, like many NBA veterans, took an eye for what was happening with COVID-19 around the league in early December and saw it as an opportunity. That opportunity blossoms with the G League, as they can earn a call-up from an NBA team by playing with one of the team’s in the league. There have been 113 NBA Call-Up’s so far this season from the G League.

“A lot of veterans are looking at the situation with the NBA and G League right now,” Chalmers expressed. “We didn’t have that chance to transition from a young player to the veteran at the end of the bench, or someone the team wants to keep around to help mentor and play the right way. I missed being away from my family and realized the overseas basketball life wasn’t for me.”

A trio of moves!

✅ Veteran Mario Chalmers has been acquired by the Grand Rapids Gold

✅ Justin Jackson is headed to Boston!

✅ Tyler Hall is headed to the Mecca! pic.twitter.com/eLRTqOSKQz

And what does that do for the G League, having veterans come back that can still play at a high level? Skyforce Head Coach Kasib Powell noted the influx of NBA veterans in the G League this season is great for the credibility and development of young talent.

“It only makes the league better adding those caliber of players to it,” he said. “This league has shown that it has a lot of great talent and a lot of young talent at that. For us as a league to be getting these types of credible veterans is huge and continues to show the growth of the G League.”

The opportunity brought itself for Chalmers to join the Gold for the Winter Showcase, with veterans like Lance Stephenson and Shabazz Muhammad, was the first step in getting back to the NBA.

“My opportunity with the Grand Rapids Gold was a great time to show the work I’ve been doing behind doors and that I can still play,” he said of his Showcase debut. “Jet (Jason Terry) lined it up and playing for him was a great experience.”

Catch us again in 1 HOUR on ESPNNews as we showcase vs. the @GleagueSquadron pic.twitter.com/wxYAIqJhyx

A week after the Showcase ended, on New Year’s Eve, Chalmers got the call.

After three seasons away from the NBA playing overseas, he re-signed with the HEAT and all he’d been working for started to pay off.

After spending a brief amount of time with the HEAT, he noticed some changes, but credited that to the way the game is played. The foundation set in Miami will be there forever.

“In many ways, HEAT culture has stayed the same, but it has also changed over the years. I will tell the young guys the stories of Pat Riley and Coach Spoelstra – and how they challenge someone to see how much they wanted to win. The game has changed, you must adapt, but you can’t change the principles. That is what the culture is all about.”

As a man of his stature and someone who has won a championship at every level, Chalmers admittingly noted his goal isn’t to stay in the G League forever. But, while he’s here, he wants to make a fundamental impact on the Skyforce and help the organization win games.

“I want to show that I can still play, but I really want to mentor the younger guys and show them what it takes to not only get to that next level, but to stay there for a long time,” he noted. “A lot of people are content now with just making it to the league and not worrying about how to stay. I want to show them how to make their mark, but consistently.

I am not on my high horse. There is no Hollywood stuff for me. I am here for a reason. I want to help Kasib and the Skyforce win games. Making a real impact is what it’s about. I am willing to do whatever it takes to win, and I want to put that work in.”

Powell gushed at the opportunity to coach someone like Chalmers and the impact he will have on his team is insurmountable.

“It means a lot to have someone of his caliber here. Hopefully I can learn from him,” he said. “Obviously, with what he has accomplished on the court, I want to pick his brain and see how he was able to get to that level. Not only that, but how he was able to help manage a team that had so much talent. It’s going to be like having a coach on the floor. That is one of the biggest benefits to a team. I am excited to get to work with him.”

The connection between Chalmers and Powell doesn’t start in the 2021-22 G League regular season. The two played in the 2008 Summer League and then training camp that following fall for the HEAT.

According to Chalmers, that relationship only helps the transition back to the G League – his first true stay in the league.

“That helps a lot,” he said. “We have put in the grind together. That trust and mutual respect is already there. The way basketball is, we don’t put in the work we used to. That’s no fault to anyone, it’s just how it is. Kasib knows the work it takes to get to the league. We come from a different creed. Being familiar with him makes it that much easier.” 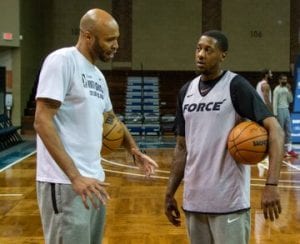 The relationships run deep on the Skyforce roster, as well. Chalmers and teammate Brandon Knight (a Fort Lauderdale, FL native) worked out in the summertime in Miami together.

He also played in Ice Cube’s ‘The Big 3’ league with Skyforce center Earl Clark. And, he worked out with Force guard Mike Smith this past summer as Smith geared to come to training camp in Sioux Falls.

“This is a perfect situation. I have been working out with B Knight the last three-or-four summers,” Chalmers said. “I hung out with Earl while we were in The Big 3. We played against each other overseas last year, too. There are some familiar faces. I even worked out with Mike (Smith) before he left for Sioux Falls when we were in Miami. We just know each other and know our games. That is crucial, that learning curve is already there with those guys.”

For the 35-year-old Chalmers, he is soaking it all in, yet giving it another chance to show he belongs, trying to put that last piece in the puzzle.

“This is an exciting time to be back playing basketball,” he said. “All the other stuff will work itself out. I have a lot left in the tank. I am ready to show the world that I can still play.”

Chalmers and the Skyforce start a three-game homestand, starting Saturday (today) at the Sanford Pentagon against the Memphis Hustle. Tip-off is slated for 7:00 PM CST on Saturday, with the series finale against the Hustle on Sunday at 3:00 PM CST.