On Saturday, July 16, the Miami HEAT signed Marcus Garrett and Darius Days to two-way contracts. Both players will be rostered with the HEAT and the Sioux Falls Skyforce to start the 2022-23 season. In this two-part two-way series, we will highlight and show fans what to expect from each as the NBA Summer League has officially ended, with attention shifted towards training camp in September.

It feels as if the Marcus Garrett comeback story has just begun.

The 2019 Naismith Defensive Player of the Year by way of Kansas earned his second crack at a two-way contract with the HEAT at the end of the NBA Summer League in Las Vegas.

“I came back to finish off what I started,” Garrett told Ira Winderman of the South Florida Sun Sentinel ahead of the NBA Summer League. “I like this team, this organization and what they stand for. The way they play is something I want to be a part of. So I’ve just stuck with this team.”

HEAT and Skyforce fans are familiar with Garrett, as he played in a combined 20 games for the two teams last season before a wrist injury ended his season.

“I love the organization. I love how it feels like family. That’s kind of something I’ve been accustomed to throughout my whole career. It’s not something that I just wanted to leave and not be a part of.”

When healthy, he showed potential of being a blue-chip defensive stopper with the ability to play-make on the offensive side of the ball. Both qualities are in high demand for NBA teams.

It’s also not a well-known secret that the HEAT is notorious for attracting the type of players who put a keen emphasis on playing defense.

After going undrafted, Garrett signed to play with the HEAT in the 2021 Summer League. His steady, highly efficient play kept him on the radar of earning a roster spot with Miami.

Ahead of HEAT training camp, he inked his two-way deal. The Dallas, Texas native played in three preseason games for Miami, where he averaged 2.3 points, 1.7 rebounds and 2.0 assists per 7.4 minutes.

MG was allocated to Sioux Falls, where he played in the eight Showcase Cup games and averaged 12.8 points on 40.4 percent shooting, 8.3 rebounds, 5.1 assists and 2.1 steals per 33.8 minutes.

His offensive capabilities were highlighted in his first regular season G League game, against the Iowa Wolves on November 6, where he had a career-high 18 points on 8-17 FGA, seven rebounds and six assists.

Less than a week later, with a game already similar to that of Skyforce legend Briante Weber, he became the first player since Weber on January 31, 2017, to etch a triple double (14 points, 15 rebounds and 10 assists versus the Grand Rapids Gold on November 11).

After some back-and-forth time between Sioux Falls and Miami, Garrett returned to secure a double-double at the Motor City Cruise on December 7 with 17 points on 7-14 FGA and 10 rebounds in one of his last games with the Force.

@MiamiHEAT #TwoWayPlayer Marcus Garrett with the scoop and coast-to-coast score.

Of all eligible players in the Showcase Cup who played eight-or-more games, MG had a PIE (Player Impact Estimate) of 11.3, which was good for 11th in the G League. PIE is a metric to gauge a player’s all-around contribution to the game.

So, when he was healthy and the court, Garrett was one of the most impactful players in the G League.

Staying in Miami during his injury proved to be the right decision. He was able to stay in the scene and continue to be a part of the bigger picture.

“The wrist was hurting every day,” Garrett told Winderman. “Me getting the surgery helped with it a lot. Now it’s just all love being back.

“It was just me being in Miami, staying around, still watching the games. I wasn’t at the games, but I still lived there. I felt like I was still a part of it and am still part of it.”

In his first game in almost six months, he scored 13 points on 5-6 FGA, while adding three rebounds and assists in 26 minutes in a victory over the Boston Celtics on July 9.

With a roster spot secured, the more time he can hone in on development as the 2022-23 season looms. Garrett fits the HEAT and Skyforce DNA, and is poised to breakout this season, whether that is in the G League, or NBA.

Skyforce fans love players who show effort on both ends of the court. Garrett will lock up opposing team’s best player, while continuing to ascend on the offensive side of the ball with great basketball IQ and playmaking ability. 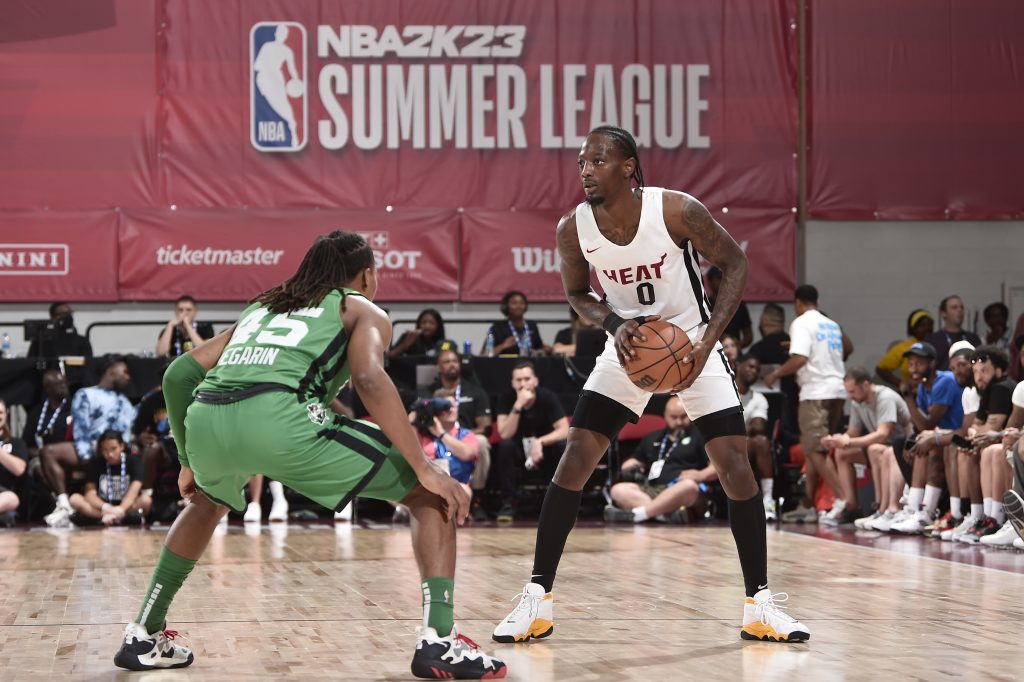 Catch the full story with Garrett and Winderman here: https://www.sun-sentinel.com/sports/miami-heat/fl-sp-miami-heat-notebook-friday-20220708-ujfqddi4hbf5tgwcl4hzq4qp4a-story.html.