With the NBA Draft officially behind us, the next item on the pro basketball calendar is the 2022 NBA Summer League, slated for July 7-17 on the campus of UNLV in Las Vegas, Nevada.

For the HEAT, things kick off in the fourth annual California Classic at the Chase Center in San Francisco, California on July 2-3. Miami will play the Los Angeles Lakers at 4:00 PM CST against the Sacramento Kings at 12:00 PM CST.

For the second straight year, Miami will be coached by Malik Allen. He is an Assistant Coach for Erik Spoelstra and is no stranger to the journey the players on his roster are about to embark on, as he started his NBA career undrafted out of Villanova. He played with the Miami HEAT from 2001-05 and would go on to play parts of 10 seasons in the Association. Allen has been on the Miami coaching staff since June 2019.

Next, we take a look at those with Skyforce ties in the 2022 NBA Summer League. Stay tuned on all social media platforms for updates on Skyforce alumnus this summer. 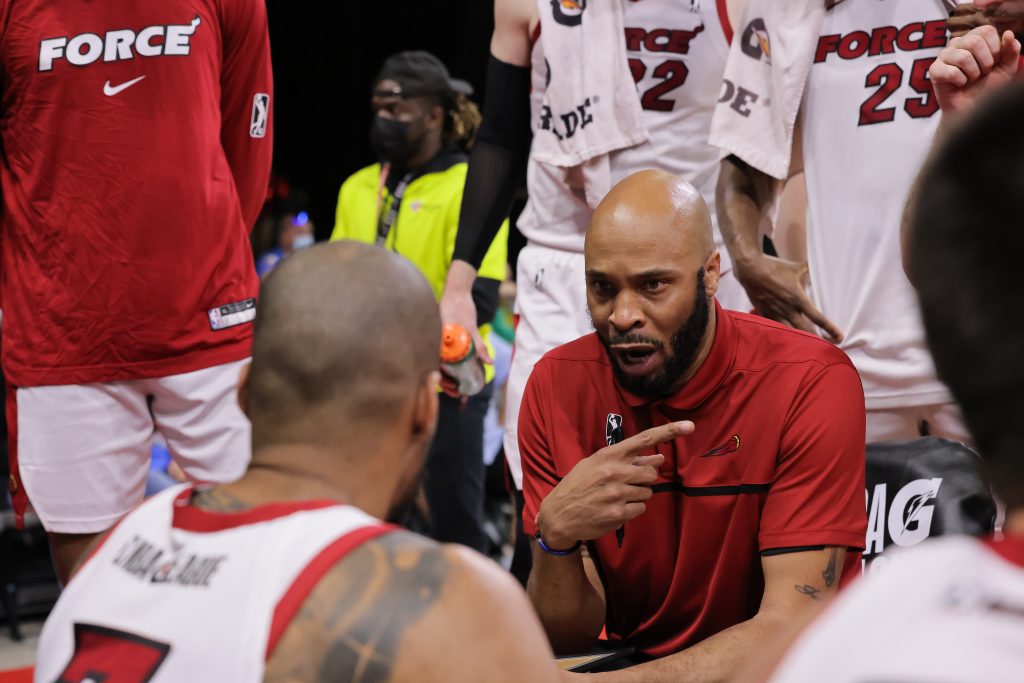 New Jersey is represented well within the HEAT Summer League coaching staff. Both Allen (Willingboro) and Powell (Teaneck) are natives of The Garden State.

In 2008, Powell suited up for Miami in the NBA Summer League in Orlando, Florida. He averaged 13.4 points on 54 percent shooting, 4.4 rebounds and 0.8 assists per 28.1 minutes for Miami. It marked his third of five Summer League’s as a player.

After spending time with the HEAT after the conclusion of the 2021-22 Skyforce season, Powell joins Allen as an  Assistant Coach for the second consecutive season in the NBA Summer League.

Starting as an Assistant Coach for Sioux Falls in 2016-17, Powell has coached every Force alumni playing in the NBA Summer League in some capacity. Six of those players were a part of the 2021-22 Skyforce team.

The former league MVP will get a head start on building relationships and a first look at those fighting for two-way contracts and exhibit-10 deals that will eventually lead to roster spots on the 2022-23 Skyforce team. 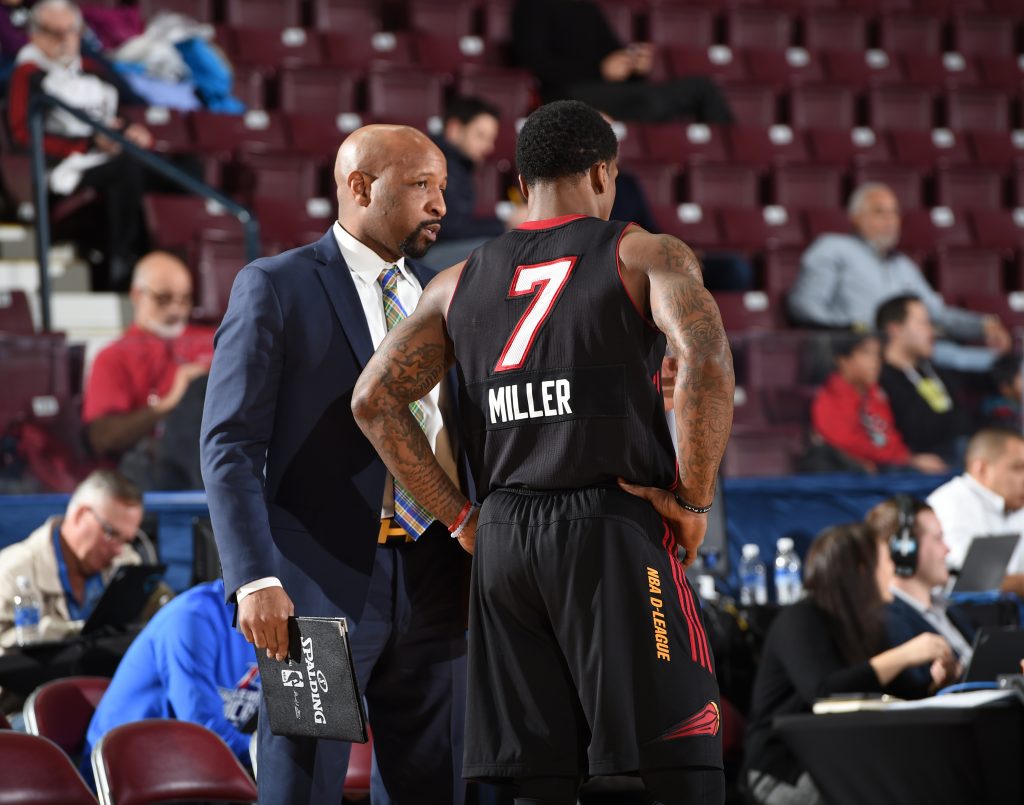 Like Allen and Powell, Carter spent time as a player with the HEAT and is now coaching in some capacity for them. He suited up for Miami from 1999-03 and even played with Allen from 2001-03. The chemistry they have has been fermenting for almost two decades.

After two seasons as an assistant coach for the Sioux Falls Skyforce, Anthony Carter jumped at an opportunity to become a Player Development Coach for the Miami HEAT prior to the 2018-19 season and has been with the NBA club since.

It didn’t take Carter long to establish himself as one of the best player development coaches around during his time with the Skyforce, and the HEAT wasted no time in snatching him up (as they so often do with young coaches who show promise).

Carter’s 13-year playing career boosts his credibility with any young player coming into the league, and he’s become a staple on the HEAT bench now in his fourth season since making the leap. 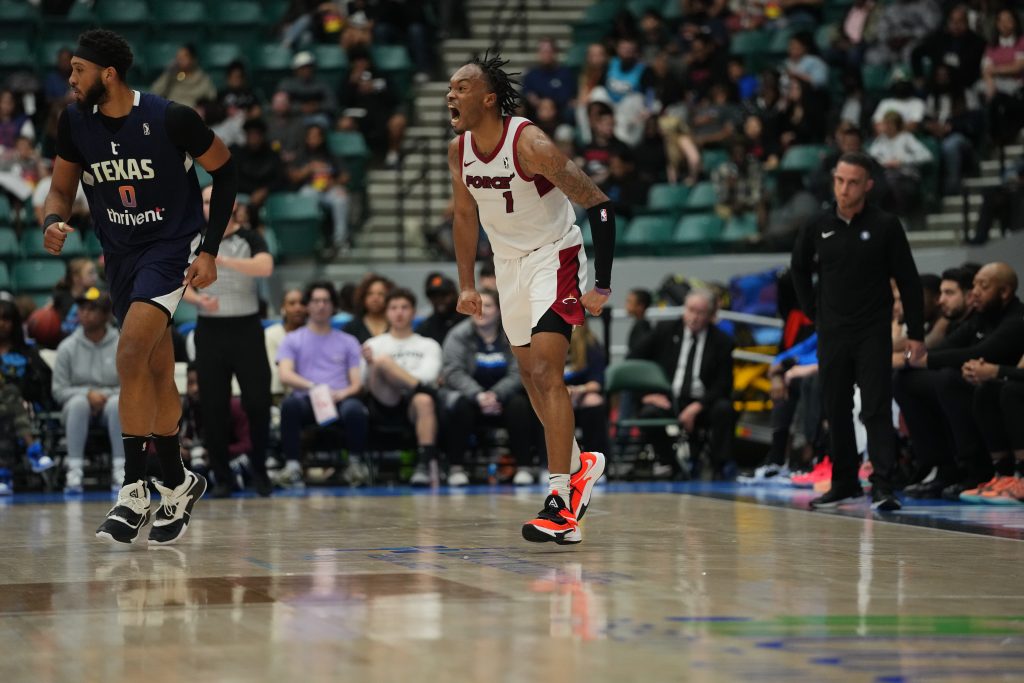 The two-way player gets his second crack at the NBA Summer League with the HEAT, as he appeared in four games last summer for Miami in Las Vegas and averaged 5.8 points, 3.0 rebounds and 1.8 assists per 19. 3 minutes.

Smart turned heads in the G League last season, as he earned two NBA Call-Ups with the Skyforce, the latter being a two-way with the HEAT in February. He appeared in four games for Miami last season, averaging 5.0 points on 47.1 percent shooting, 1.3 rebounds and 0.5 assists per 10 minutes. In the season finale against the Orlando Magic, Smart scored 20 points on 8-14 FGA and added five rebounds.

As a part of his two-way deal, Smart focused heavily on development with the HEAT coaching staff during the playoffs, as two-way players are ineligible for game action during the postseason.

Looking back at the full calendar year, Smart has improved each step of the way through hard work. I wouldn’t expect that to stop. He will be a key piece to the HEAT’s success during Summer League. Mulder is set to play in his third NBA Summer League, as he played for the Toronto Raptors in 2017 and the Chicago Bulls in 2019. However, this marks his second overall stint with the Miami HEAT.

He participated in the 2019 training camp and preseason with Miami. Mulder joined the Skyforce after the preseason with the HEAT and went on to score 17.0 points on 45.1 percent shooting (40.0 percent from three), 4.5 rebounds, 1.4 assists and 1.0 steals per 33.2 minutes in 39 games (34 starts). He moved to second in made three pointers in a season, behind Duncan Robinson, with 151. Mulder’s play earned him an NBA Call-Up with the Golden State Warriors, where he played parts of two seasons.

During a three-game span in March, Mulder poured in 39 points on 11-17 3PA (good for second all-time in Skyforce history for 3PM) and 35 points on 13-21 FGA. This was enough for Miami to make the call to fill the final two-way spot on their roster. He appeared in two games (one start) for the HEAT at the end of the season, averaging 7.0 points on 40 percent shooting (50 percent from three), 1.5 rebounds and 1.0 assist per 22.1 minutes a game.

Just like Smart, Mulder was able to spend a lot of time in the lab perfecting his craft during Miami’s playoff run. This is a great advantage, as he looks to make a crack at the active roster this upcoming season. With the most NBA experience on the Summer League roster, Mulder will provide veteran leadership to a team with 10 rookies. 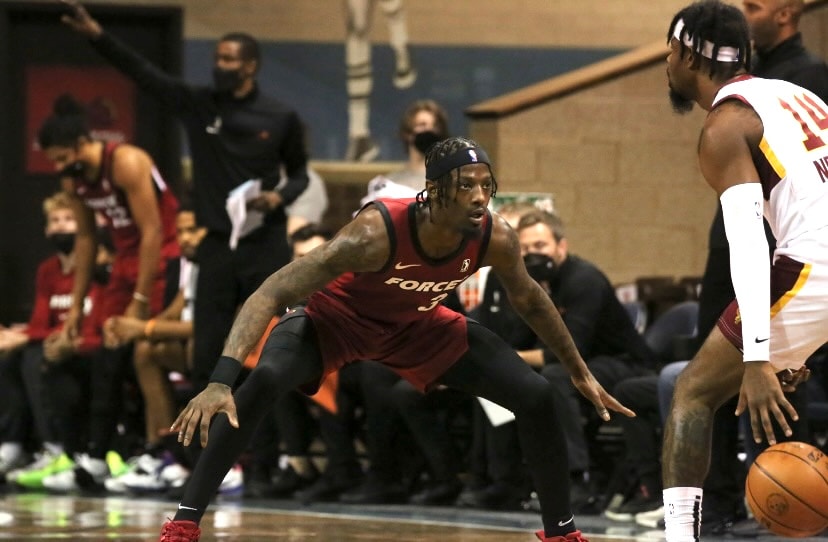 The former two-way guard out of Kansas with heavy upside, especially on the defensive end, returns with the HEAT after a season ending hand injury in January.

His play earned him a two-way roster spot in early September. He appeared in 12 games for the HEAT, averaging 1.1 points, 1.9 rebounds and 0.6 assists per 10.7 minutes a game.

Healthy and ready to go, as he was able to continue to work in Miami, look for Garrett to play the way he did in Las Vegas and in Sioux Falls – tenacity on defense and the ability to slash to the rim and create for others on offense. 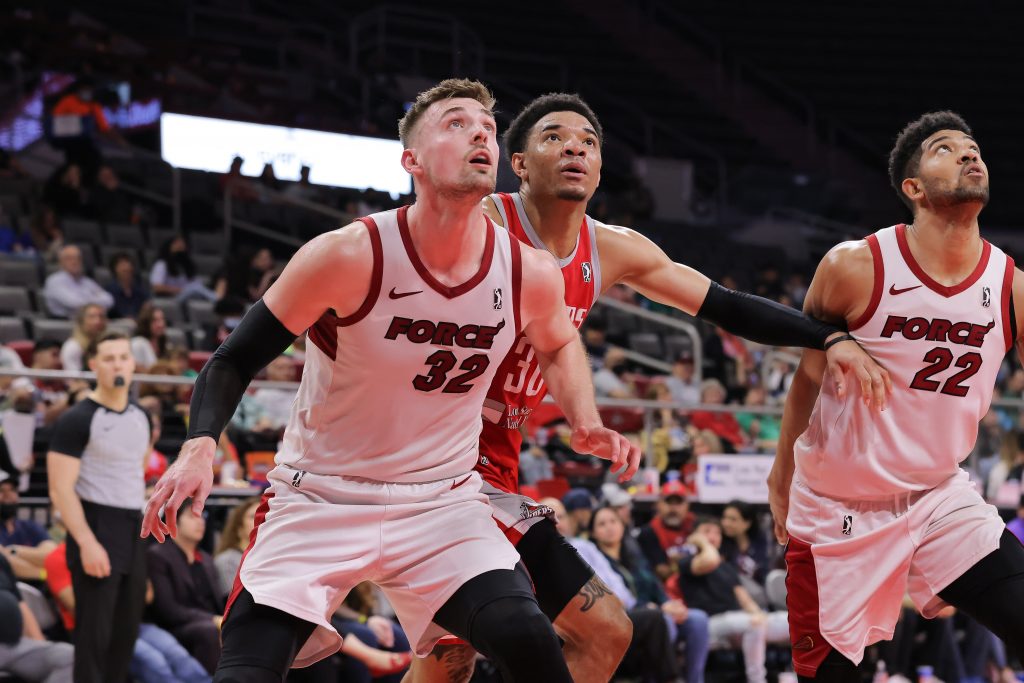 The big man out of Wisconsin made a name for himself in 2021-22. His growth from start-to-end was arguably the best of any in a Skyforce uniform last season. Now, he gets a chance with the Knicks.

He earned a spot on the NBA G League All-Rookie Team, the first player since Duncan Robinson and Yante Maten in 2018-19 to earn such honor. Potter was in good company, to say the least.

Big Jam joined the Force as an affiliate player and averaged 17.2 points on 53.4 percent shooting, 9.9 rebounds and 1.7 blocks in 33 starts for Powell. He posted 15 double doubles (team-high) and scored 20-plus points in nine of his last 13 games.

His steady play to end the Showcase Cup earned him an NBA Call-Up with the Detroit Pistons at the end of December, as he averaged 4.0 points and 3.0 rebounds in 10.3 minutes in three games.

Potter was a walking double-double at the end of the season, while also shooting the ball well over 50 percent in the last month-and-change of the season. He was on the brink of another NBA Call-Up.

With a year of the pro game under his belt, Potter should excel in the Summer League and be on high alert to make an NBA roster this upcoming season.

Potter and the Knicks square off against the Golden State Warriors on Friday, July 8 at 7:00 PM CST. 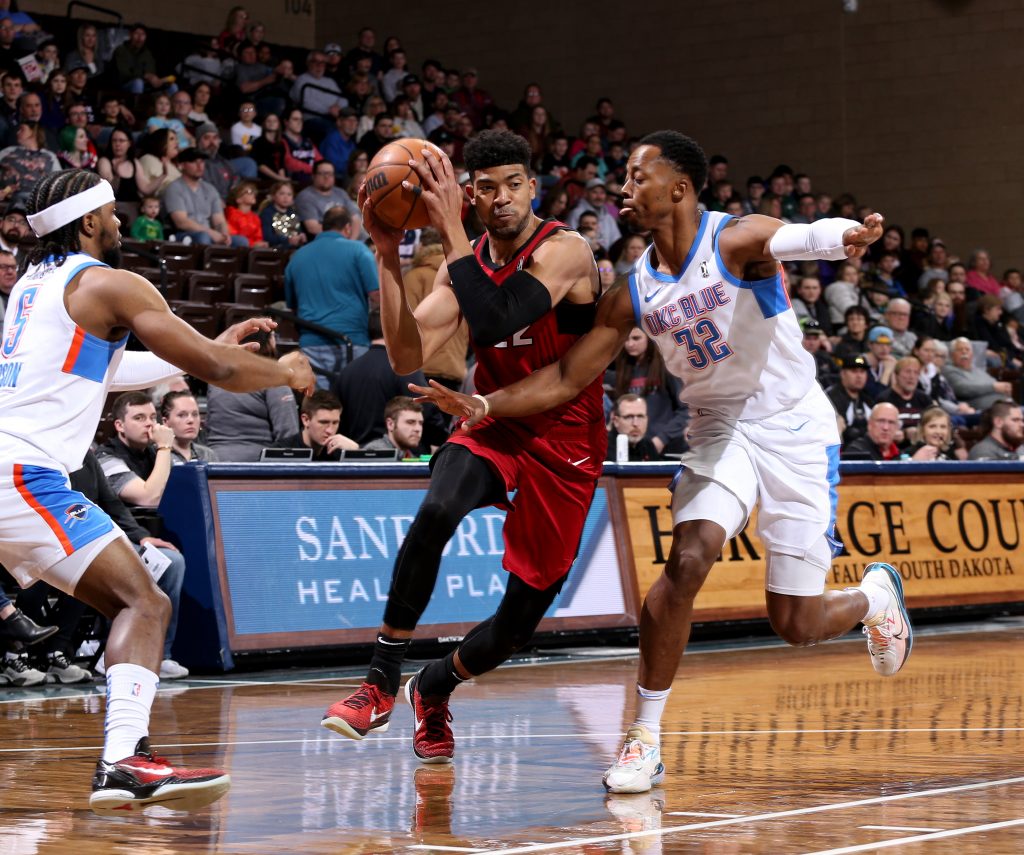 This will be the third NBA Summer League for Chandler Hutchison, as he spent 2018 and 2019 with the Chicago Bulls.

Hutch joined the Skyforce in the beginning of February and made an immediate impact in the starting lineup.

He provided the team with much needed muscle and athletic ability, which translated to a much better defensive team. It also helped open the floor for the Force, as they were able to get into transition a lot easier.

Simply put, the acquisition of the former first round NBA pick positioned Sioux Falls to play in a way they hadn’t been able to all season.

After parts of three seasons in the NBA, Hutchison looks to show teams in the Association how the growth in his game this past season in the G League will translate in the future.

You can catch Hutch and the Hawks on Saturday, July 9, against the Utah Jazz at 6:30 PM CST. 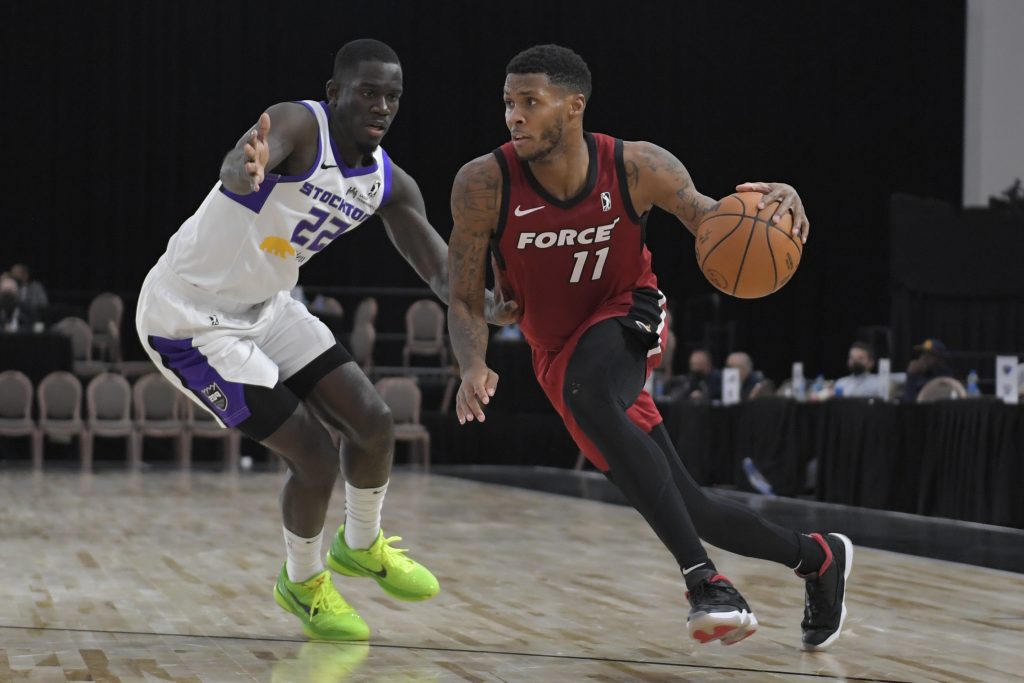 DJ Stewart’s light turned on at the NBA G League Winter Showcase and it sparked into a two-way deal with the San Antonio Spurs. But before that, he got his start with the Miami HEAT at the 2021 Summer League.

Stewart was allocated to the Skyforce and steadily improved throughout the season. In 22 starts in the regular season, DJ posted 20 points on 49.7 percent shooting, 5.4 rebounds, 3.3 assists and 1.5 steals per 37.0 minutes a game.

In five of his last six games in a Skyforce uniform, he posted 23-plus points, with two games over 32 points. Not to mention, he shot over 53 percent from the field in each of those five games.

On March 4 he inked his two-way deal with the Spurs. In a whole new system with San Antonio and Austin, Stewart continued to gel, as he averaged 14.4 points on 45 percent shooting, 3.0 rebounds and 2.9 assists per 29.4 minutes in 14 games (12 starts).

Of any player on this list, you could argue that Stewart has the most upside. His athletic ability and high motor is already at an NBA level. If he continues at his ascend, he will be a fixture in the NBA.

Stewart and the Spurs kick off the 2022 NBA Summer League with a tilt against the Cleveland Cavaliers on Friday, July 8 at 4:00 PM CST. 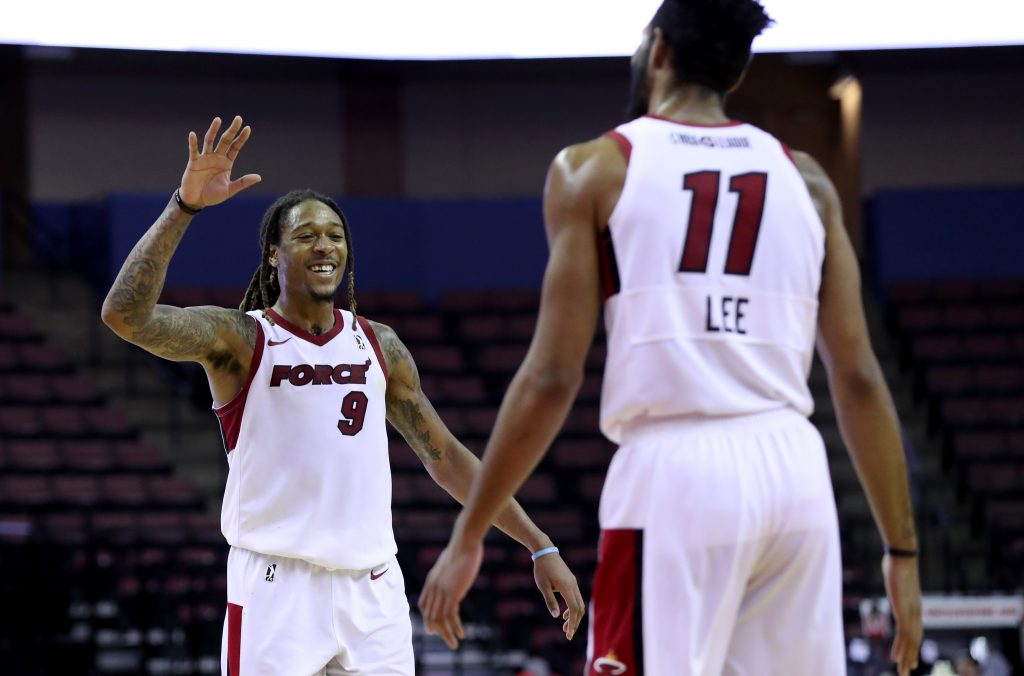 ET brought the energy in 2018-19 to Sioux Falls from the Canton Charge midseason. His play earned him two NBA Call-Ups that season, one with the Phoenix Suns and the other with the Miami HEAT.

Terry is approaching his fourth NBA Summer League, as he played with the Denver Nuggets in 2018, Oklahoma City Thunder in 2019 and the Sacramento Kings in 2021.

This past season, Terry suited up for the Stockton Kings. He had splits of 14.2 points on 66.3 percent shooting, 8.6 rebounds and 1.8 assists per 28.0 minutes in 29 games (17 starts). Against Sioux Falls, in a loss at the Winter Showcase, Terry put together an 18-point (9-15 FGA), 21-rebound double-double, while adding seven assists and four blocks.

The steady big man provides leadership to a young Orlando roster in this year’s Summer League. You know what you’ll get out of the Alabama native – a high motor, effort on both ends of the floor and the ability to protect the rim. 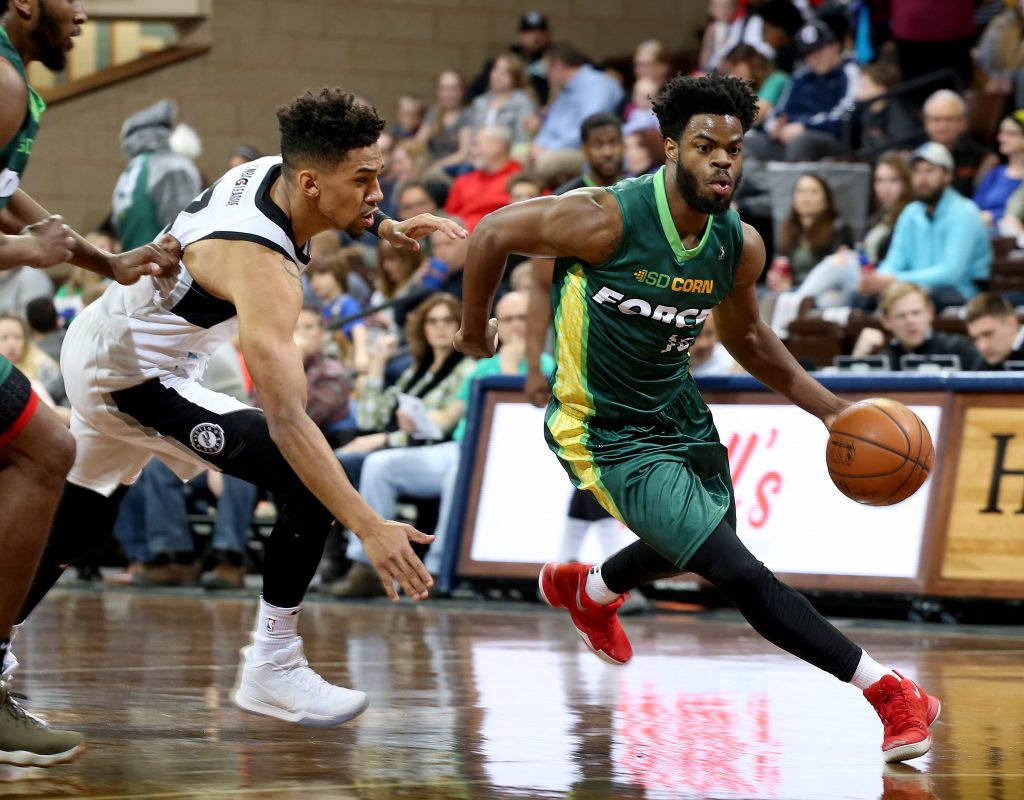 The final player on our list is former HEAT two-way player Derrick Walton, Jr. He makes his third appearance in the NBA Summer League this week, with previous stints with the Orlando Magic, Miami HEAT and Los Angeles Clippers.

He also joins former Force player in Stewart on the roster. They are the only opposing team with multiple players that suited up for Sioux Falls.

Walton, Jr. most recently played for the Motor City Cruise, where he averaged 16.8 points on 50.5 percent shooting, 5.6 rebounds and 9.5 assists (all career highs). His play earned him an NBA Call-Up with the Detroit Pistons, as he started in three games and scored 6.3 points, 3.3 rebounds and 7.0 assists in 36.1 minutes per game.

The Michigan alumnus had a resurgence last season and is looking to take the next leap in his game, with an invite to an NBA training camp in the fall.