Many NBA Draft picks have found their way to Sioux Falls, South Dakota throughout the years. Most recently, Miami HEAT forward KZ Okpala played for the Skyforce while on assignment during the 2019-20 season. As the NBA G League has grown, so too has its viability as a developmental pathway for soon-to-be NBA contributors. This has meant that more and more young players are spending time in the G League to begin their careers.

Sioux Falls’ history with former NBA Draft picks extends far beyond the last few seasons, though. NBA legend Darryl Dawkins played for the Skyforce at the tail end of his career. Amir Johnson was one of the the first NBA assignment players to play in Sioux Falls after the Skyforce entered the NBA G League in 2006. Skyforce legend Randy Livingston, who played most of his career in the CBA and NBA G League, all make appearances on the list. Every story is unique.

Though the Skyforce may not have been a team they anticipated spending time with in their career, this list is anything but a “drop out” list. Most, if not all, of these players used their time in Sioux Falls as either a springboard into a full-time NBA position or to revitalize their career as a veteran athlete.

We’ve highlighted a few of our favorite former NBA Draft picks below, followed by a full list of additional Skyforce alumni who at one point heard their names called on Draft Night. 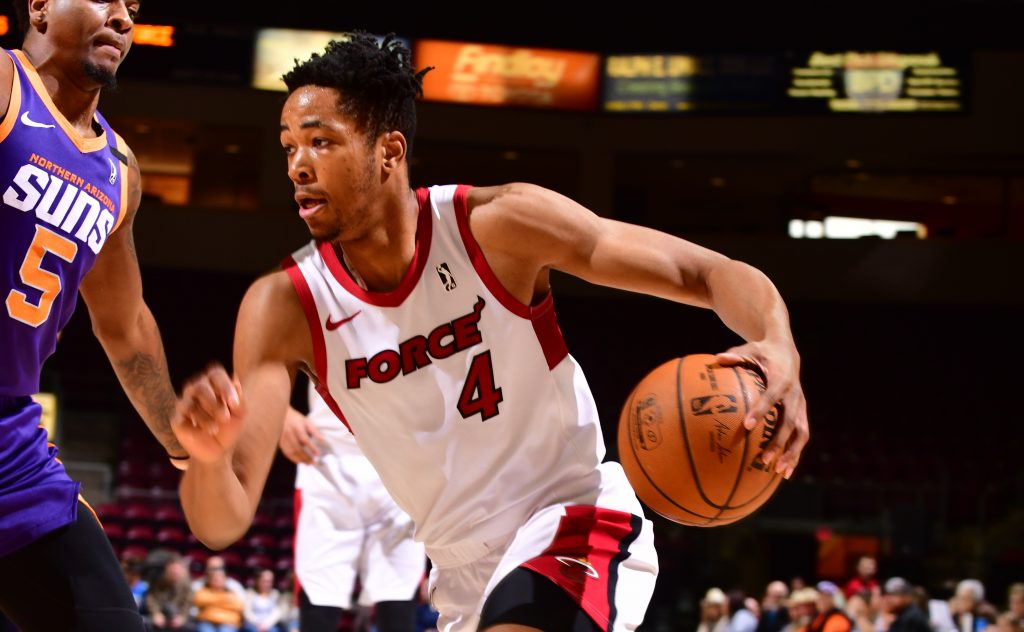 The Phoenix Suns selected KZ Okpala with the 32 pick in the 2019 NBA Draft on behalf of the Miami HEAT, who had traded up with the Suns to nab him. Okpala, who just completed his second NBA season and is now representing Nigeria in the Tokyo Olympics, was drafted as a well-liked prospect and has taken strides (especially on defense) since entering the league.

During the 2019-20 season, Okpala appeared in 20 games while on assignment with the Skyforce (20 starts) and averaged 11.7 points, 7.2 rebounds, 2.0 assists, 1.3 steals and 1.1 blocks per contest. He, along with others on the most recent Skyforce roster, began to hit his stride down the stretch prior to the NBA G League shutdown due to COVID-19 concerns. 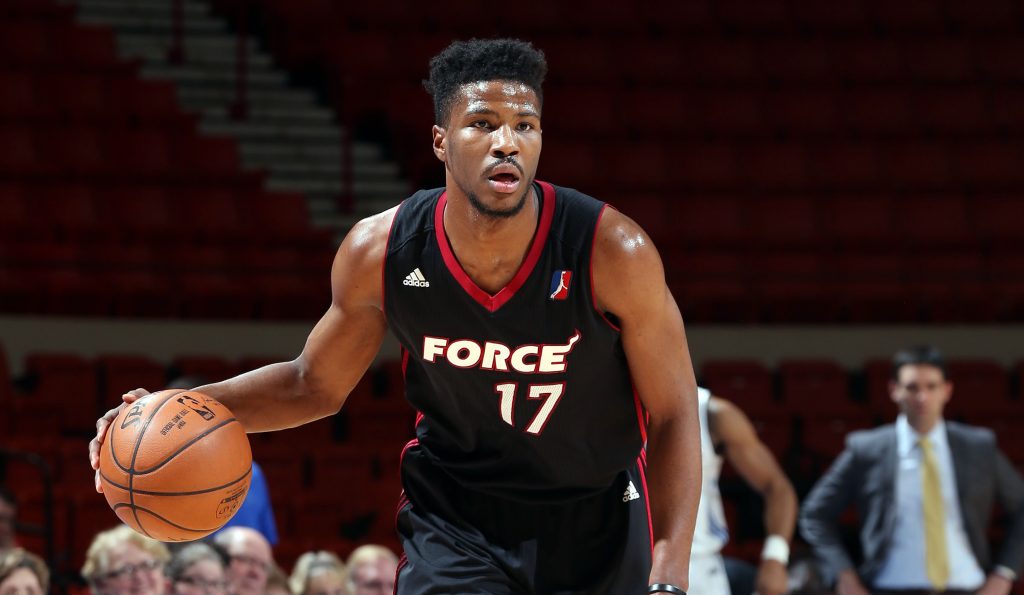 After being drafted 19th overall by the Denver Nuggets in the 2016 NBA Draft, Malik Beasley spent much of his rookie year moving back and forth between Denver and Sioux Falls while playing on assignment. It didn’t take him long to prove his worth. Beasley quickly became known as Malik “BEAST-ley” during his time in Sioux Falls, and quickly became a quality rotation player for the Nuggets over the first few years of his career. 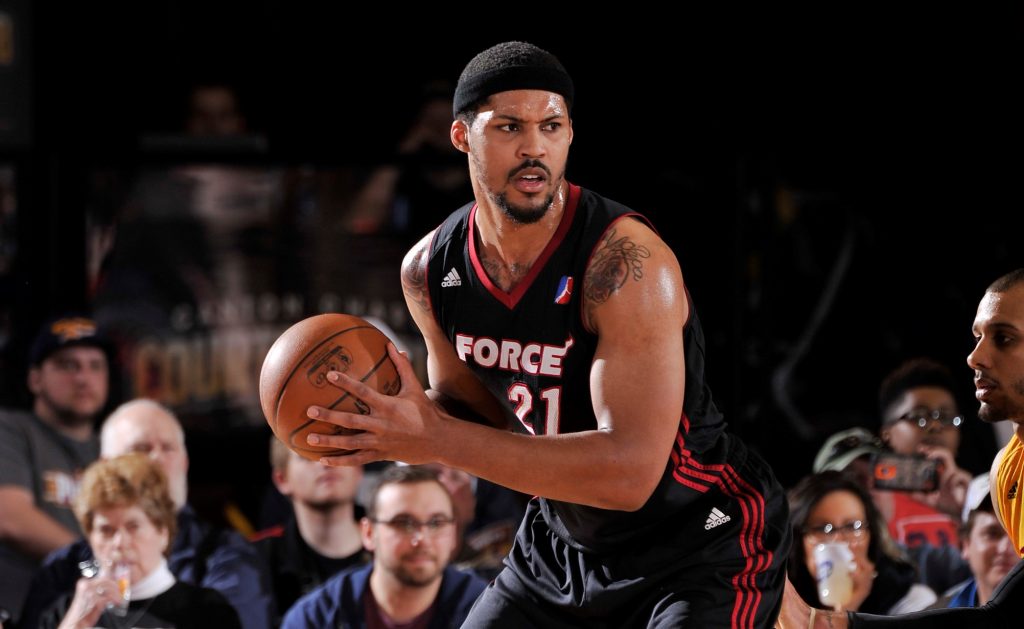 Though it was the Utah Jazz who selected Jarnell Stokes with the 35th overall pick in the 2014 NBA Draft, the Memphis Grizzlies were the ones calling the shots via trade. Stokes began his career with the Grizzlies before being acquired by the Miami HEAT during the 2015-16 season.

The rest is history.

Stokes played out the majority of his stint with the Miami HEAT on assignment in Sioux Falls. Later, when the HEAT released Stokes at the trade deadline, he returned to Sioux Falls to finish what he had started. By “finish what he started” we mean win NBA G League MVP honors, followed by NBA G League Finals MVP recognition and the first league championship for the Force since entering the G League. It was an incredible run, one that has him firmly cemented as one of the greatest players in Skyforce franchise history.

In 28 games during the 2015-16 season, Stokes averaged 20.6 points and 9.3 rebounds again while shooting over 66 percent from the field. Stokes would later go on to appear in six more contests with the Skyforce during the 2018-19 season before departing a second time. 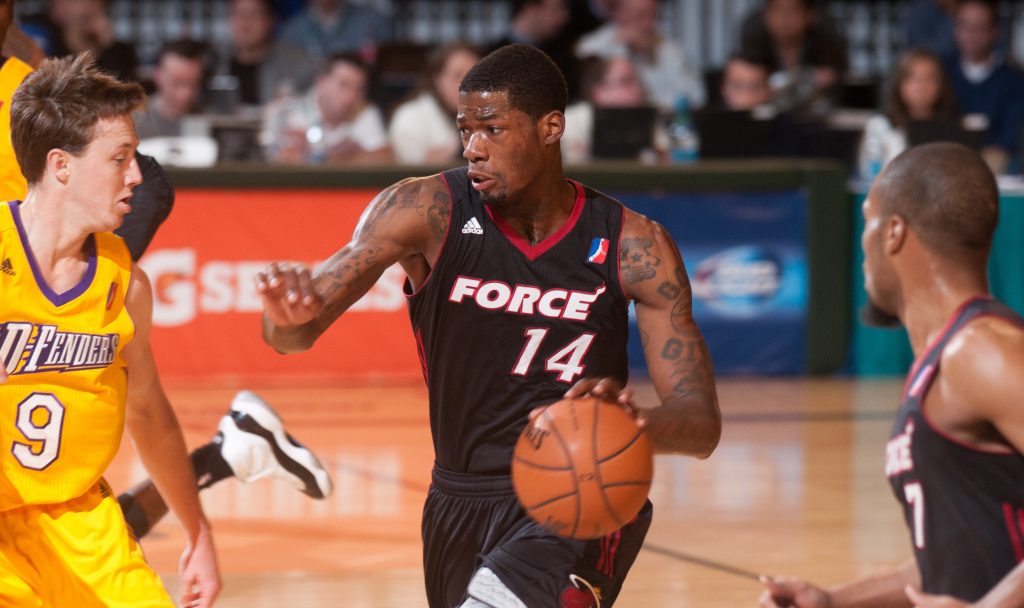 DeAndre Liggins, who was originally drafted by the Orlando Magic with the 53rd overall pick in the 2011 NBA Draft, is the definition of an NBA journeyman. Liggins wound up playing roughly 2.5 seasons in Sioux Falls, highlighted by stellar campaigns in the 2013-14 and 2015-16 seasons.

Liggins is a 2x NBA G League Defensive Player of the Year, NBA Champion and former NBA Call-Up. In total, he appeared in 101 games (95 starts) for the Skyforce while averaging 13.0 points, 6.3 rebounds and 5.8 assists per contest.

Liggins played for a plethora of NBA organizations throughout his tenure, including the Orlando Magic, The Oklahoma City Thunder, the Miami HEAT, the Cleveland Cavaliers, the Dallas Mavericks, the Milwaukee Bucks and the New Orleans Pelicans. 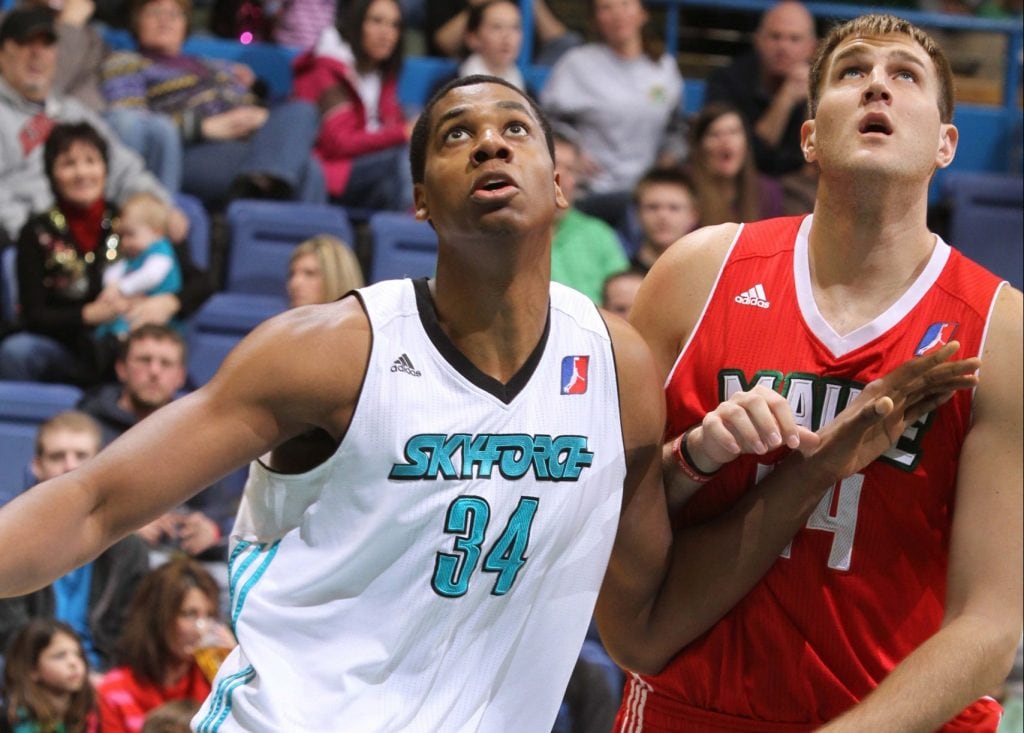 Whiteside’s path to the NBA is a unique one. After being selected 33rd overall by the Sacramento Kings in the 2010 NBA Draft, Whiteside spent time with the Reno Bighorns (then-Kings G League affiliate) each of his first two seasons as a pro. After being released by the Kings, Whiteside was claimed by the Sioux Falls Skyforce via the available player pool in 2012.

Whiteside’s first stint in Sioux Falls was anything but glorious, appearing in just seven games prior to being traded to the Rio Grande Valley Vipers. He was then out of the league entirely during the 2013-14 season before his rights were acquired by the Iowa Wolves in 2014, who were then affiliated with the Memphis Grizzlies.

He was a different player entirely, one that the HEAT saw fit to pounce on before anyone else could. The HEAT traded for Whiteside’s rights during the 2014-15 season, and Whiteside appeared in one game on assignment in Sioux Falls that year scoring 21 points on 10-of-11 FG, adding 12 rebounds and collecting four blocked shots.

He went on to become the first NBA player to sign a max contract after being on a league minimum deal with the Miami HEAT in advance of the 2016 season. He recently signed a new contract to return to the Sacramento Kings prior to the 2020-21 season. 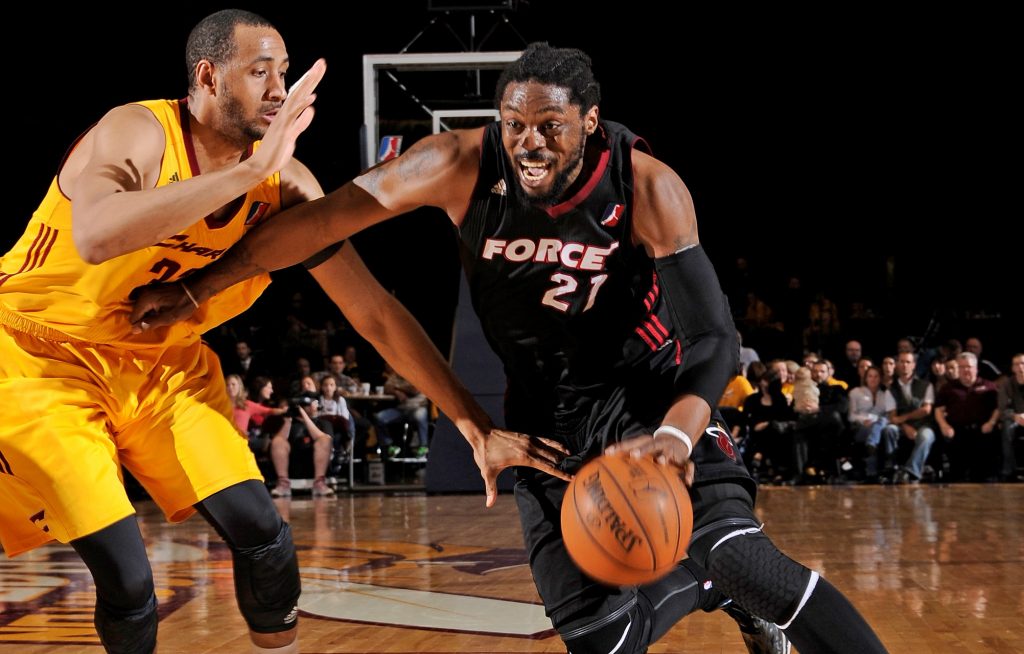 Henry Walker was selected 47th overall by the Washington Wizards during the 2008 NBA Draft, though it was the Boston Celtics who had acquired his draft rights via a draft day trade. The majority of Walker’s NBA career was played prior to when he appeared in Sioux Falls for the first time, splitting time with Boston and the New York Knicks over the first four years of his professional career.

Walker joined the Skyforce prior to the 2013-14 season, and almost immediately became a fan favorite. He would ultimately earn an NBA Call-Up to the Miami HEAT during the 2014-15 season where he remained for the rest of the year.

In total, Walker appeared in 90 games (46 starts) for Sioux Falls, averaging 14.2 points and 4.9 rebounds per game. He also sits in fourth place in Skyforce franchise history with 231 career three-pointers made. 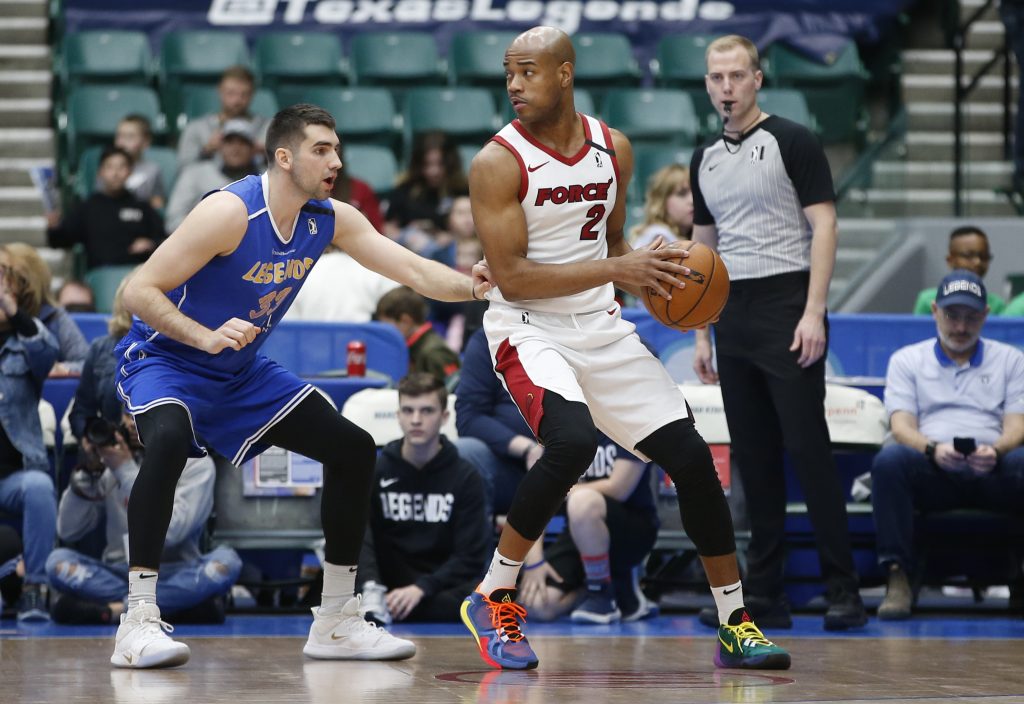 Jarrett Jack and Amir Johnson were both drafted in the 2005 NBA Draft, but their stints with the Skyforce were separated by over a decade of NBA Basketball. After 13 seasons in the NBA, Jack joined the Skyforce in hopes of proving he still could play at a high level coming off of an ACL tear.

He appeared in one game for the Force during the 2018-19 season, dropping 21 points, seven assists and five rebounds in three quarters before suffering another setback. It was a torn ACL again.

Less than a year later, Jack returned to Sioux Falls during the 2019-20 season and served as the engine for what was a surging Skyforce team prior to the COVID-19 shutdown. Jack appeared in 25 games that season (20 starts) and averaged 15.6 points, 5.0 assists and 3.3 rebounds in under 25 minutes per game.

There’s still more gas in the tank, to say the least. 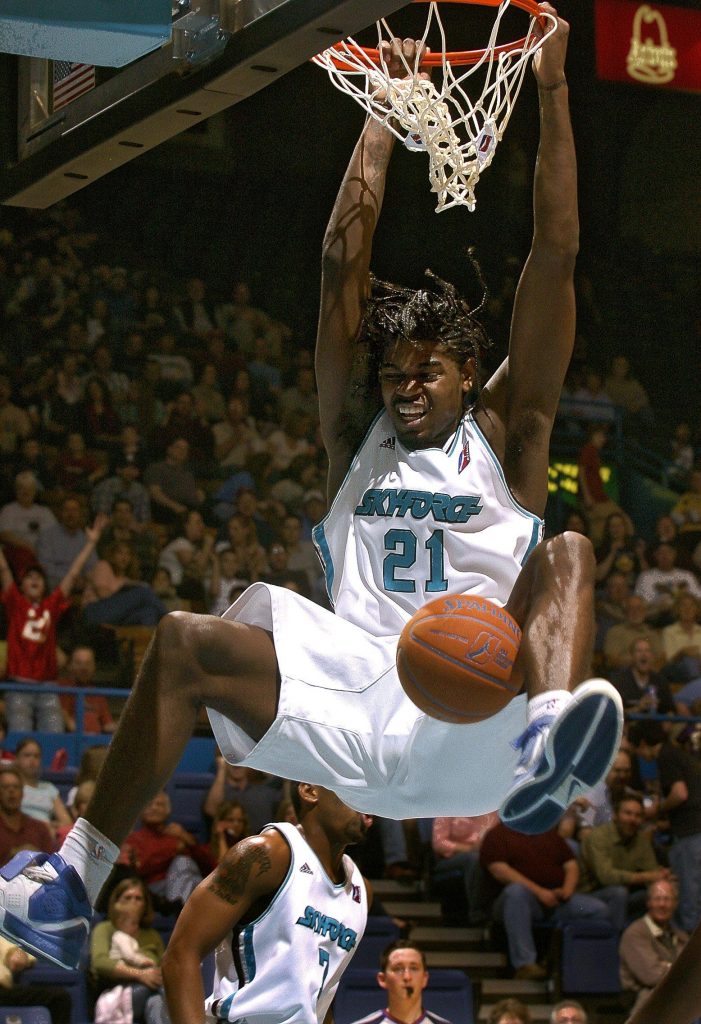 Amir Johnson marked one of the last players allowed to be drafted to the NBA straight out of high school. After being selected in the second round of the 2005 NBA Draft, he was in need of some further development. It was because of this that Johnson became one of the first “official” NBA Assignment players for the Sioux Falls Skyforce as a member of the NBA G League along with teammate Will Blalock.

Johnson appeared in 22 games (22 starts) while on assignment with the Force, averaging 18.9 points and 9.6 rebounds while shooting nearly 75 percent from the field. He was NBA-ready, and went on to put together a successful 14-year NBA career. 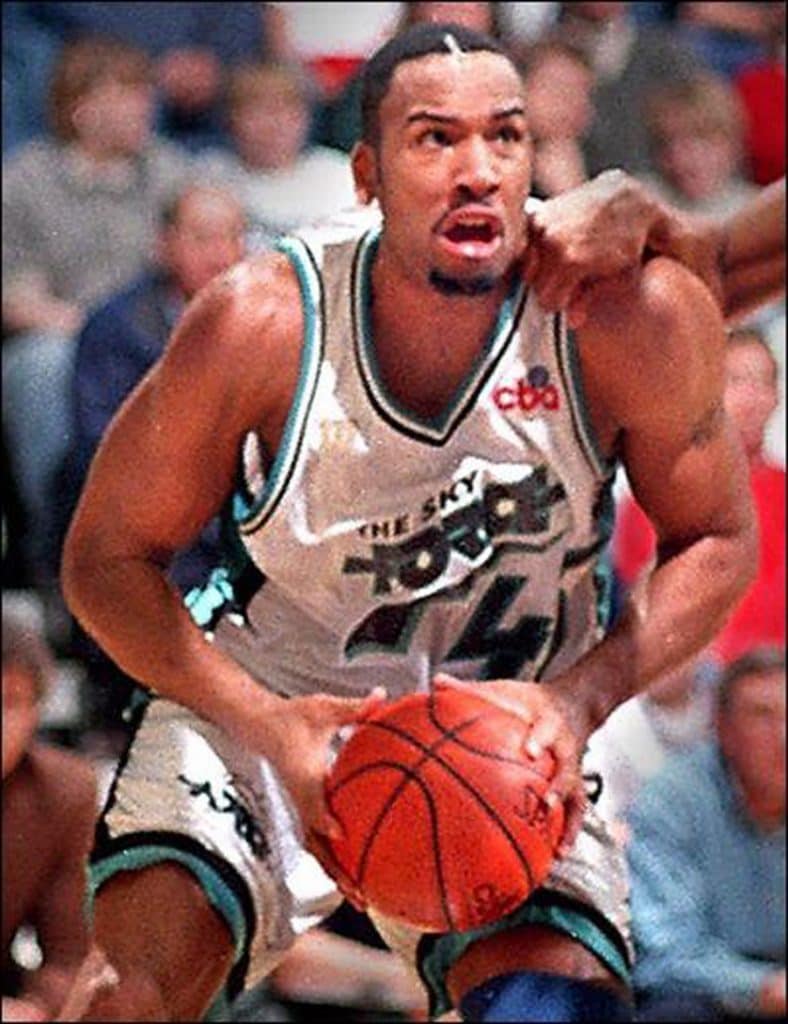 Stacey King was drafted by the Chicago Bulls with the 6th overall pick of the 1989 NBA Draft, and went on to win three-straight NBA Championships alongside Michael Jordan and the rest of the Chicago Bulls between 1991-93.

It wasn’t until 1997 that King joined the Skyforce as a player, appearing in 37 games over the course of two seasons and averaging 13.8 points and 9.4 rebounds per contest. He then served a brief stint as Head Coach of the Skyforce during the 2002-03 season. 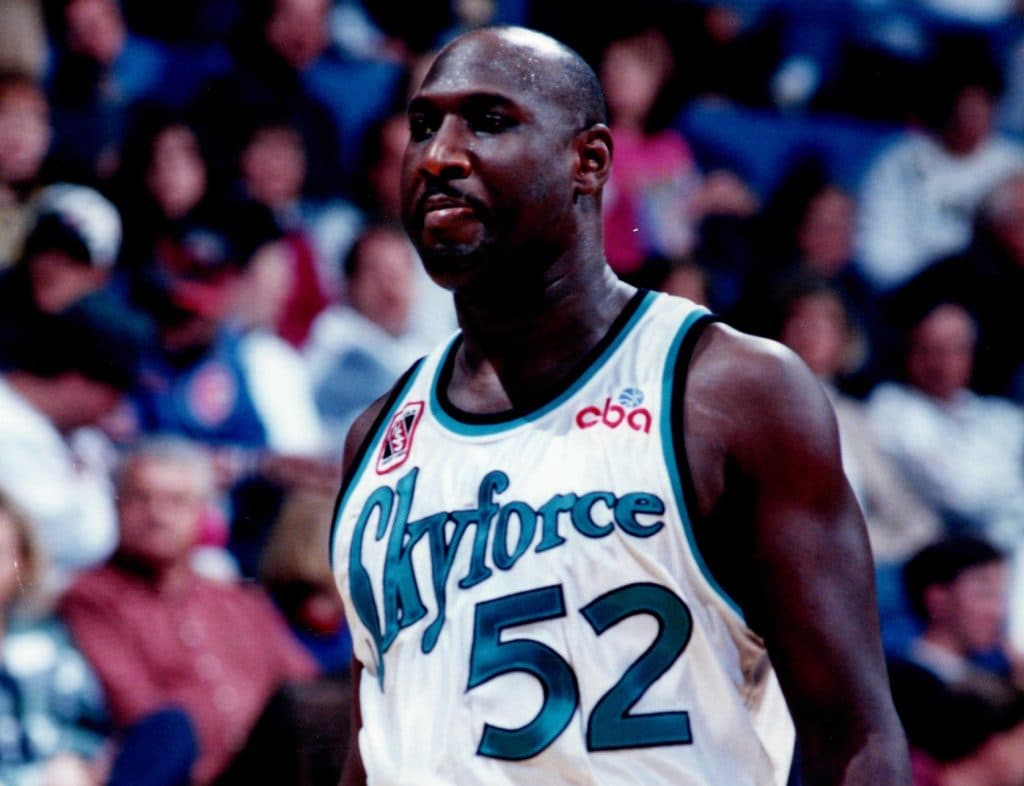 The late Darryl Dawkins’ NBA resume needs no further explanation. “Chocolate Thunder” spent 14 seasons in the NBA between when he was drafted in 1975 and his final stint with the Detroit Pistons which ended in 1989.

Long-time Skyforce fans will remember the waves Dawkins made locally when it was announced he was joining the Skyforce during the 1995-96 season. In total, he averaged 13.5 points and 6.6 rebounds in 22 games played (four starts), earning CBA All-Star honors in 1996. Though Dawkins departed before the season was over, Sioux Falls went on to win its first CBA Championship that season.

Other former Skyforce players selected on draft night (in chronological order) include: