The Sioux Falls Skyforce, and the NBA G League as a whole, exist as a pathway for young players to eventually achieve their dream of playing in the NBA. From basketball operations executives and coaches to front office staff, everyone in the organization is doing their best to support these players in any way they can. Few, however, are asked to do more than Skyforce Athletic Trainer Ian Lackey.

Lackey, who is now entering his third full season with the Force, serves as a “first responder” in more ways than one for young athletes who make their way through Miami and Sioux Falls each year. He’s the first person a player sees when they enter the locker room, and often the last face they see before they leave. The responsibility of keeping athletes healthy, as well as helping them to learn more about how to take care of their body throughout their career, is a job Lackey looks forward to each season.

“Most of the guys [on the Skyforce roster] these days are young guys,” said Lackey. “They sometimes have no idea what their body needs…what works and what doesn’t for them. I get to help them become a professional, in that sense. That’s probably what I like most about this job. Helping guys understand that they’re not 17 years old anymore, that they have to take care of their bodies on a daily basis. That’s a big part of my job, and something I really enjoy doing.”

The basketball world in general is still somewhat new for Lackey, who grew up playing football and began his work in athletic training by primarily working with fall-sport athletes. For some, it takes a while to decide what career they’d like to pursue in life. For Lackey, it was never in doubt.

“I started having an interest in athletic training back in high school,” said Lackey. “Just being involved in high school sports and understanding there are a lot of health care needs in the sports world…I obviously love sports but saw myself having a career in health care. That’s when I first started thinking about getting into athletic training.”

Lackey finished high school and went on to play football at Dakota Wesleyan University while earning his undergraduate degree in athletic training. The transition from player to trainer was an abrupt one for Lackey, who ruptured his Achilles before his senior football season. At that point, a decision had to be made.

“At that point I was faced with deciding if I wanted to play a fifth year of eligibility with a medical redshirt, or just jump straight into a career,” said Lackey. “After working with the athletic trainer throughout the fall season (while injured), I knew I was ready. I wanted to dive in. So the transition from being an athlete to being a trainer happened quickly. It was tough, at first, but looking back I think it was definitely the right decision.”

Being thrown into the fire is something Lackey would later get used to. From Dakota Wesleyan, Lackey went on to earn a master’s degree in Kinesiology and Sports Science, with an emphasis on exercise science, from the University of South Dakota. All of this took place while working as a grad assistant in USD’s athletic training department. 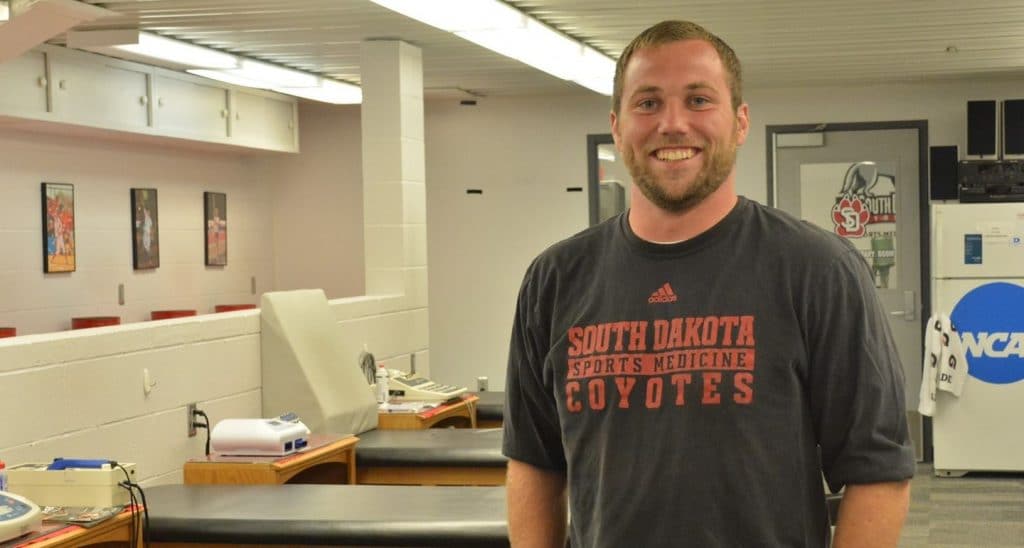 “Athletic training is actually a really unique field,” said Lackey. “In college, you’re kind of already on the job when you’re an athletic training student. When I started to do my first injury evaluations, my first rehab assignments…getting to be a part of a team from an athletic training standpoint rather than just as an athlete, helping the injured athletes become healthy or keeping athletes on the court working through different injuries, that’s what really affirmed that I was doing what I wanted to do.”

Lackey went on to be hired as a full-time athletic trainer at USD in 2016, where he worked primarily with football, track, swimming, and women’s soccer. The transition to working in professional basketball, despite having a football background and working primarily with fall sports to that point in his career, wasn’t as hard as you might think, according to Lackey.

“With this job, [basketball] is a lower-injury-risk sport and you have a much smaller roster,” said Lackey. “When you’re working with a football team, you have to have a huge staff to do the same things I’m able to do with just 12-to-14 players each season.”

Lackey wasn’t simply transitioning from football to basketball, though. He was transitioning to the professional sports world, and into the Miami HEAT system specifically. The HEAT have built a reputation for developing young talent over the years, and as of the 2018-19 G League season, Lackey serves as the HEAT’s first line of defense in protecting and preparing its young athletes for the demands of a professional basketball season. This, Lackey says, is a task that the HEAT are constantly supporting him in.

“I’m constantly texting, calling, emailing back and forth with almost the entire HEAT medical and athletic training staff throughout the season,” said Lackey. “The fact that they are available to me like that has been great.”

That connection is key. As much as Sioux Falls already emulates the “HEAT Culture” that’s become widely recognized around the NBA and basketball world, it’s even more vital for Lackey and the Sanford medical team here in Sioux Falls to be on the same page as the medical and training staff down in Miami. Now with two-way players, exhibit 10 contracts and assignees, the majority of players on each year’s Skyforce roster have spent with, or are currently on, the Miami HEAT roster. This makes consistency in health care all the more important and adds some pressure to Lackey’s job here in South Dakota. 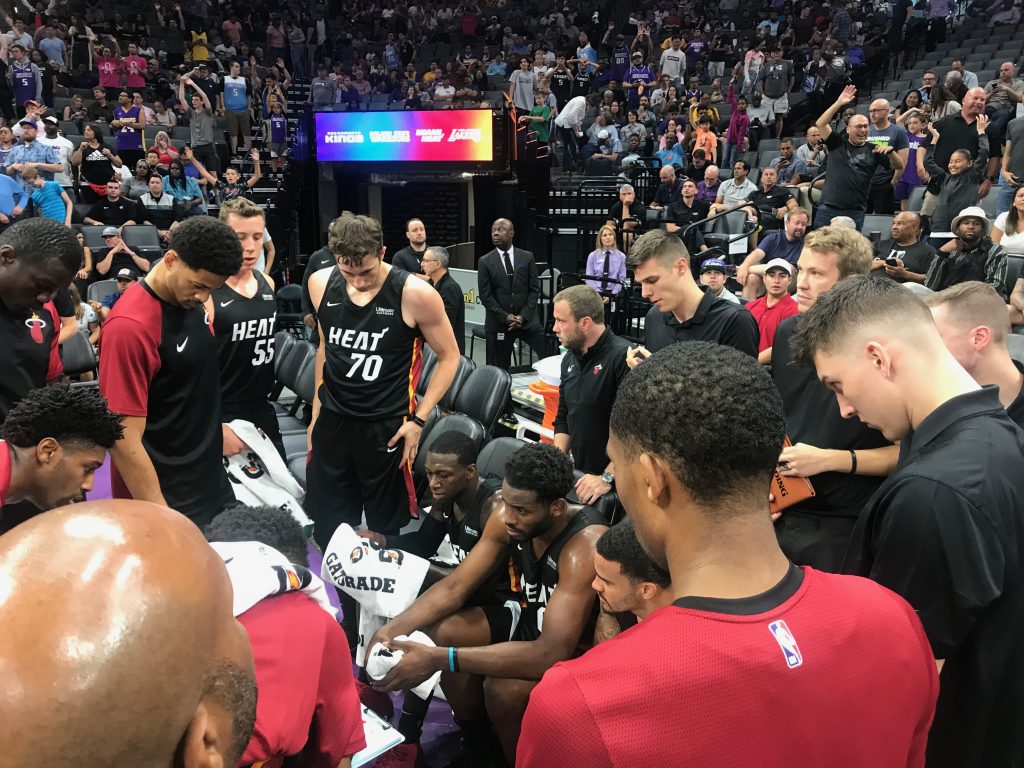 “There’s pressure in knowing that what you do with these guys, the decisions you make, could ultimately affect the rest of their career in one way or another,” said Lackey. “That’s why I’m constantly communicating with the HEAT staff. From the biggest decisions to the smallest decisions, you have to make sure everyone’s on the same page. Players’ careers are on the line. There’s a lot of money involved for the player and for the team at the professional level. As a trainer in the professional world, it’s my job to help kick start, sustain and prolong the careers of our players.”

Miami has poured time and energy into Lackey in the same way that they so often pour time and energy into young players, coaches, and staff members coming up through the Skyforce ranks. At every turn, however, Lackey is allowed to do things his own way while under the greater HEAT umbrella. That freedom, alongside the opportunities and investments made by the HEAT throughout his career, have helped Lackey get to where he is today.

“Being able to go down there and join [the HEAT staff] for training camp each year has been great,” said Lackey. “They basically just tell me to do whatever I normally do here in Sioux Falls, and if they have a problem with anything they’ll speak up…but they never do.”

It’s been a custom in recent years for much of the Skyforce basketball operations staff, Lackey included, to join the HEAT for its pre-season training camp. Many of the “fringe players” at training camp end up playing with the Skyforce at some point throughout each ensuing season, and it serves as a great opportunity to build a relationship between the Sioux Falls staff and those players at the beginning of the year. For Lackey, it’s allowed him to gain first-hand experience working in an NBA setting.

“Although I primarily work with guys that will likely be spending at least some part of the season in Sioux Falls, there are also times where everyone else is busy and guys like Bam Adebayo or Tyler Herro will walk in needing something before or after practice,” said Lackey. “That time with those guys, getting to them as well, has been great.”

Being a part of the HEAT family lends itself to some pretty cool experiences. In just a few years on the job, Lackey says there are already a few moments that stick out to him as special memories. Many of them revolve around HEAT Head Coach Erik Spoelstra.

“Just the effect that Coach Spo has is so memorable,” said Lackey. “The first time I went down [for HEAT training camp] he knew everything about Sioux Falls. He knew my name. He knew what my role for the team was. He talked about what a great job Sanford Sports Complex does in Sioux Falls. That was really memorable. The fact that he knew everything about us and took the time to share that with the HEAT guys as well when he introduced us was really cool.”

As the Force begin to look ahead at making a return for the 2021-22 NBA G League season, there will undoubtedly be new challenges to face, new injuries and illnesses to diagnose, new tests and new training regimes to administer and implement. The staff in both Sioux Falls and Miami is thankful to have someone like Lackey at the forefront of those changes. 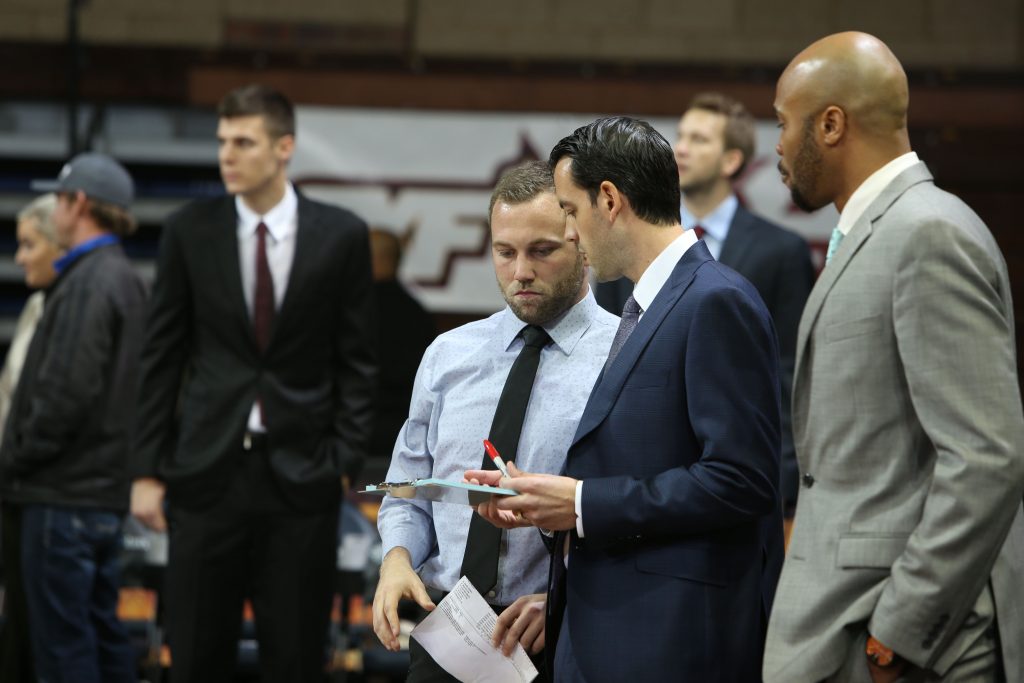 He’s more than “the guy on the bench with a clipboard.” He’s more than the guy that runs out onto the court when a player gets injured. There’s much more to his job than holding Marcus Lee’s stash of Peachie-Os before the game.

Ian Lackey is one of the best in the business and will continue to be for years to come.