Starting lineups. Instant replays. Insane in-game highlights. Live statistics. Fan cams. In-arena promotions. Every bit of information, along with every view from every angle, can all be found in one place.

Over the last decade, videoboards have become arguably the most important feature in stadiums, arenas, and other sports venues around the world. The Sanford Pentagon is no exception, but who controls what fans see and hear throughout the game? Who sits in the driver’s seat while delivering some of the best fan experiences in town?

Her name is Christine Ellenbolt, and she’s been bringing the heat as the Sioux Falls Skyforce Videoboard Director for the past 10 years. Ellenbolt started with the Force in 2011, to be exact, and thankfully for the fans in Sioux Falls, she’s still here and ready for more. 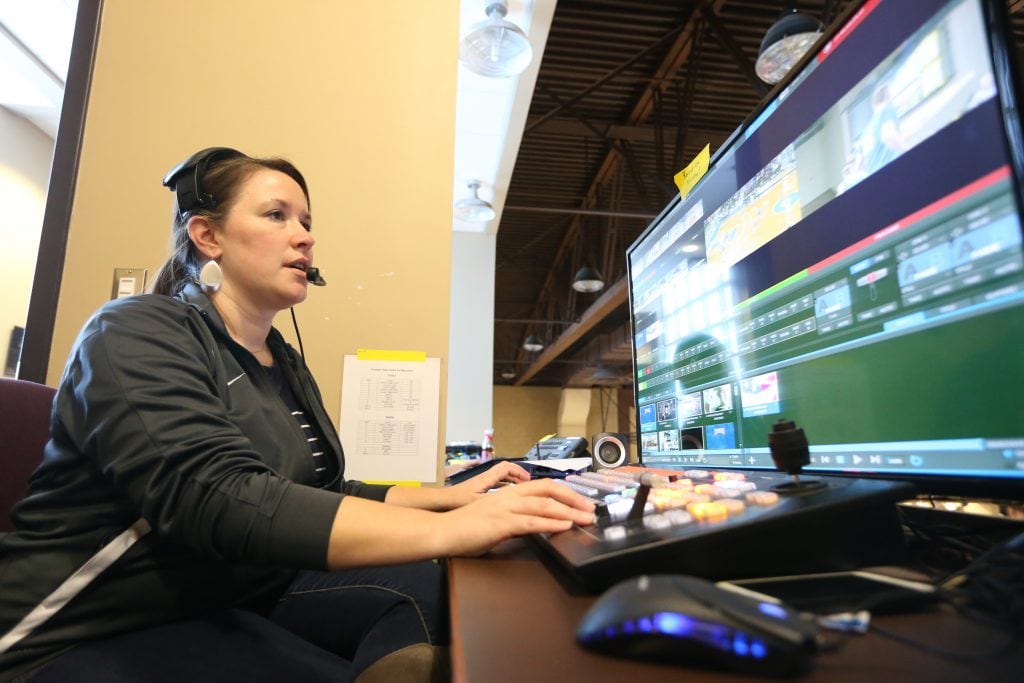 “I’ve worked with the Skyforce since videoboards were first installed at the Sioux Falls Arena in 2011,” said Ellenbolt. “I worked with HuskerVision while going to school at the University of Nebraska, and knew that Live Event Video was where I wanted to be…I was able to get a conversation with the Skyforce when they were looking to expand their video team, and was so thankful to have that opportunity. I’ve been on board ever since!”

After her time at Nebraska, Ellenbolt received her first videoboard opportunity at the newly-built Kirkeby Over Stadium on the campus of Augustana University in Sioux Falls. Two years later, she’d lined up a position on the Skyforce staff and has been intricately involved in the Force control room ever since.

Her job is much more than flipping a few switches and pressing a few buttons, however. Transitions between live-game feeds, instant replays, stats graphics, on-court promotions, and other videoboard material have become so smooth that most fans take it for granted. 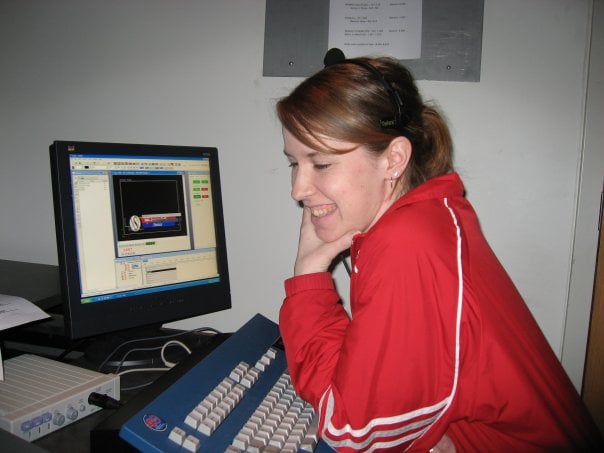 These things don’t just happen automatically. In fact, it takes far more effort and communication than you might realize.

So, what goes on that fans don’t see each night?

“Behind the scenes, I think it’s the sheer amount of communication involved in making what the fans see on the boards and on the court, happen,” said Ellenbolt. “Between promotions, replays, graphics, music, PA announcements…there’s an insane amount of coordination that goes into executing everything. Sometimes it can be overwhelming, but it’s such a fun thing to observe.”

It can be extremely difficult at times, even to seasoned veterans such as Ellenbolt. With the unique ebbs and flows that each game presents, it’s a hard trade to master completely. Each game is a little bit different. For Ellenbolt, it can be tough to live up to her own expectations, but that’s what keeps things fresh and exciting each night.

“For me, personally, the most challenging [part of the job] is my own expectations,” said Ellenbolt. “I hold myself to a high standard, and it’s hard not to dwell on the mistakes that inevitably happen, but that’s what also keeps it challenging every night. Trying to always do one notch better than your best-ever show.” 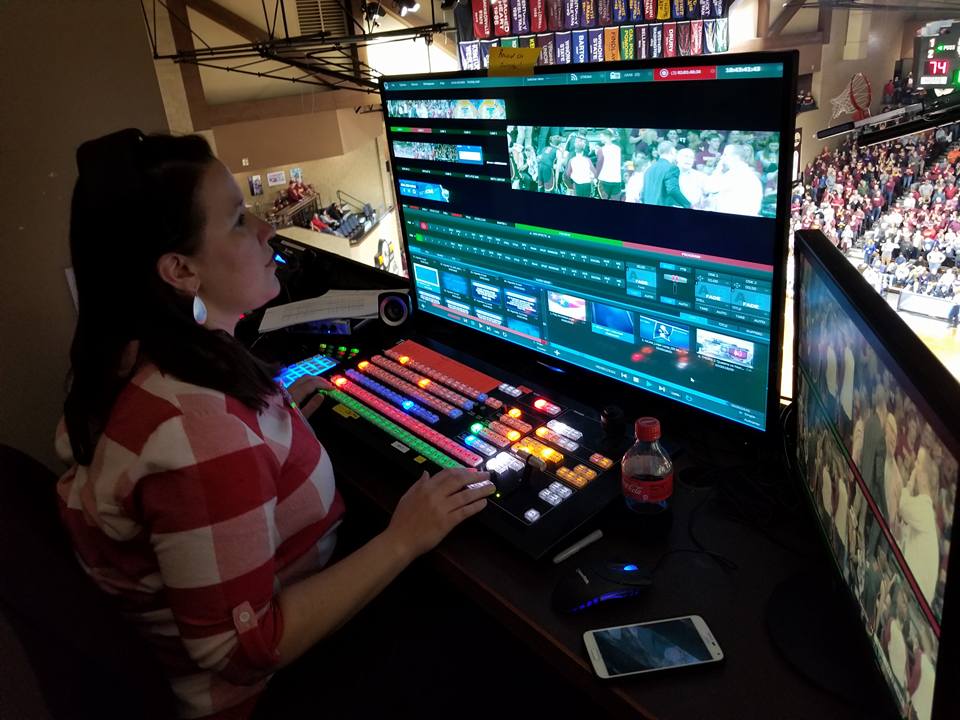 One notch better than her best-ever show is an expectation that’s becoming increasingly difficult to exceed now as Ellenbolt has worked hundreds of games in a number of different sports over the years. To even a trained eye, she’s approaching perfection. Yet to her, there’s always room for improvement.

“I know for a fact that I’ve never had a ‘perfect’ game,” said Ellenbolt. “I hope to have one someday before I decide to retire, but I’m not holding my breath. That definitely keeps things interesting every night!”

Despite the difficulty of the job, Ellenbolt wouldn’t be coming back for yet another season if she wasn’t also having a blast putting on the best possible show for Skyforce fans every night. The joy she finds in her work, and in mastering the flow of the on-screen action on game nights, is something that makes the job even more special to her.

“Getting to tell the story for the fans is probably the best part [about my job],” said Ellenbolt. “Especially in big momens of the game, when I can get emotional player shots, key replays, close-ups of the floor action on the videoboards. Anything to give the fans a little bit better perspective of the game they’ve come to watch. Whenever I get a chance to show something that you may not have been able to catch from your seat, I’m happy.”

Even the most intent fans can relate.

Christine Ellenbolt and the rest of the control room staff has your back.

From the dog days of early NBA G League play to the ascension of the 2015-16 Skyforce Championship Team, Ellenbolt’s seen and done it all in her time with the Force. From favorite players such as Emanuel Terry, Duncan Robinson, Malik Beasley and Hassan Whiteside to favorite halftime shows such as the frisbee dogs, Chicago Boyz, Quick Change or the Amazing Sladek…working behind the scenes for the Force has lent itself to some pretty special experiences, relationships, and memories.

So, what does this videoboard mastermind do when she’s not sitting at the switchboard? Who is Christine Ellenbolt when she’s not directing traffic and making sure the in-arena production is as perfect as it can be for each Skyforce home game?

“My ‘real’ job is working as the Corporate Accounts Receivable Manager for the Midwest Communications radio station group,” said Ellenbolt. “I help with 82 radio stations across the Midwest. I love the problem-solving aspect of helping clients and sales reps maintain productive billing relationships. Working in radio and media is just fun!”

Turns out, her communication skills aren’t just on display on game nights. Ellenbolt serves as the glue between client and sales representative much like she does between game operations and control room staff on a Skyforce game night. People rely on her, and she always comes through.

There’s more to Ellenbolt than just work, though.

A passion for traveling, particularly using sporting events as an excuse, has become a mainstay in Ellenbolt’s free time.

“Traveling is probably my number one hobby,” said Ellenbolt. “I very much enjoy seeing new places, trying new (and sometimes crazy) foods, visiting anything of historical significance, or unusual beauty. I’ve used sports and live games as an excuse to travel, the Rose Bowl game in 2011 being a favorite. It’s really neat to see other sports venues, but also gain an appreciation of what we have available here in Sioux Falls for live sports.

“In total, I’ve been to 37 states, four continents, and still counting…with much, much more on my to-do list.”

After so many years on the job, it’s hard to imagine Ellenbolt getting frazzled, nervous, or overly excited by any situation that might present itself on game night. Yet after over a decade in command, and hundreds of games worked, when the lights go out at the Pentagon and the starting lineups begin, there’s a rush of adrenaline that’s new every game.

“I love the pregame introductions, because it starts to feel like game time,” said Ellenbolt. “Once the Pentagon lights go out, it’s the most stressful part of my night, but nothing beats that adrenaline rush, especially when things are going as they should.” 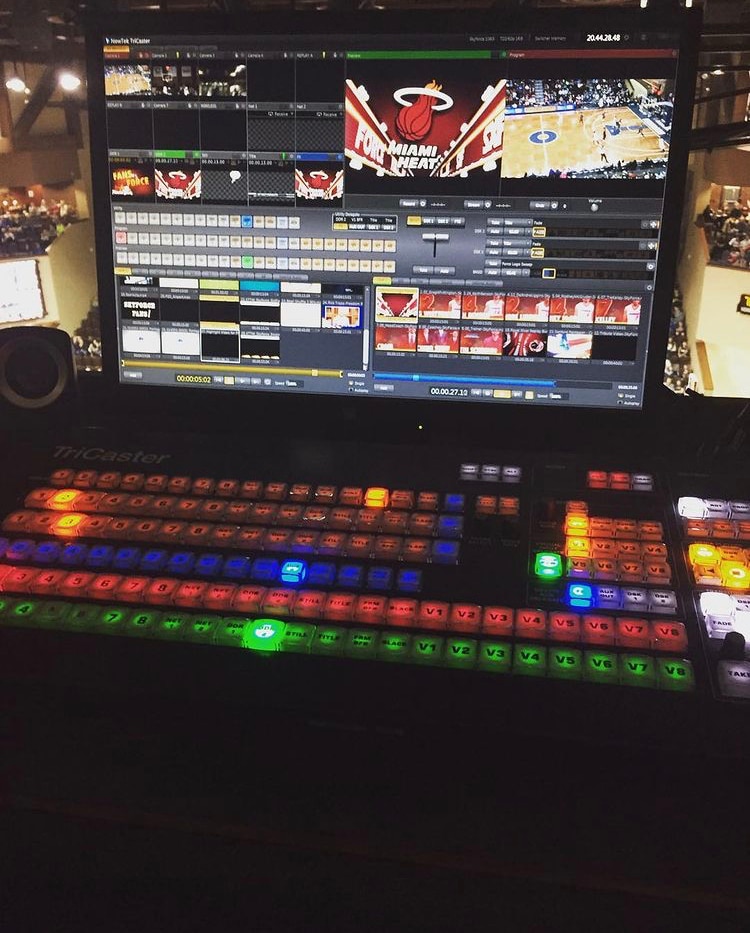 Rest assured, when the Skyforce makes its return for the 2021-22 NBA G League season…when the lights dim at the Pentagon and when the starters are introduced to the crowd for the first time, Ellenbolt will be back and ready to roll for yet another exciting year, still in pursuit of the “perfect game.”