If you’re from Sioux Falls, you’ve probably heard his voice hundreds of times without realizing it. Whether you’re listening to the radio on your morning and evening commute or settling into your seat at the Sanford Pentagon for another Skyforce home game, it’s almost inescapable. Who is that guy? Where is that voice coming from?

It’s the voice of Kickin’ 100.5 Brand Manager JD Collins, who has doubled as the official in-house voice of the Sioux Falls Skyforce dating back to his start in 2004. The art of Public Address Announcing is an extremely difficult one to master. Keeping up with the action on the court, relaying important information to the fans, rousing the crowd in “crunch time” or sharing in the crowd’s reaction to a big play, all of these things are required of the person on the mic. Yet, if done properly, seamlessly work their way into the flow of the game to the point where you may start to take them for granted.

“It took a long time for the game to slow down for me,” said Collins. “It took even longer for me to appreciate the chatter that goes on, and to not have such rabbit ears when it comes to listening what the crowd is saying behind me.”

Collins has grown into a PA guru over the years but it’s a trade, he says, that continues to present new challenges. 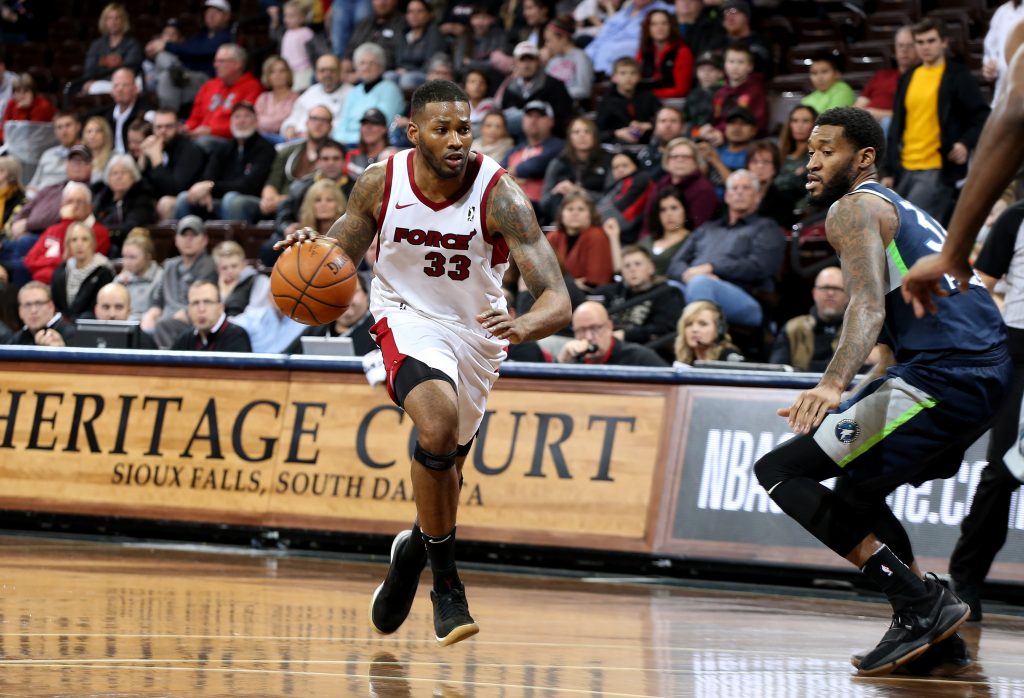 “I’ve also learned the art of not looking alarmed at the officials when they make a marginal call,” said Collins. “Oh, and who could forget the two-minute announcements at the end of each quarter or the ‘first in the last two minutes’ foul calls that have forever been a thorn in my side?”

A quick wit and a fast tongue are must-haves when you’re keeping fans engaged throughout the game. There’s no shortage of that where Collins is concerned.

“The most difficult, though, is trying to quickly eat a Lifesaver Mint before you have to talk again,” said Collins. “I’ve learned to chew fast over the years.”

As mentioned, Collins works his “day job” as Brand Manger at Kickin’ 100.5 Radio here in Sioux Falls. Radio, in fact, is the only job he’s ever had (besides his gig with the Force). Beginning in 1980, Collins’ work in radio has brought him from South Dakota to Nebraska, over to Wisconsin, on to North Dakota and finally back to Sioux Falls where he’s been for the past 28 years.

So, how did Collins and the Force come to be connected?

“I remember talking to Reid Holsen back in 2004, who had done Skyforce games for years at the time. I think Reid has the best voice that Skyforce fans have ever heard, by the way,” said Collins. “He mentioned that I might want to give Jeremy DeCurtins, now Vice President with the Force, a call and I did. After we met, a very skeptical Jeremy said, ‘let’s give it a try’ and the rest his history.”

Now in the midst of an almost 17-year run as the voice of the Force, Collins says it’s the band of loyal fans and the good people he gets to work alongside on game nights that he enjoys most about the job.

“My favorite memories are from those tough, lean years,” said Collins. The Skyforce has such a loyal fan base. They are there on the weekends…the full nights. They come to the Tuesday night games. Some of the loudest and best games, with some of the most dialed up crowds, come on those weekday nights. That’s when the REAL fans show up. They know the game!”

Surrounding Collins courtside at the scorer’s table each game is a host of game day staff who have all served the Skyforce for a number of years. Some have been involved much longer than Collins himself. Between the stats crew, the scoreboard operator, the bookkeeper, and the game operations staff, Collins has grown to love spending time with those around him.

“Getting to see people like Jason Lueth and the rest of the ‘table’ staff each night has to be one of the best parts of every home game,” said Collins. “Kylie and Ryan in game operations, and the best Book Man in the business, Tim Josephson…Our scorer’s table group is incredible. They’re all great basketball fans and all very knowledgeable of the game.”

Sitting so close to the court and being so intricately involved in each game lends itself to building relationships with more than just the staff sitting around you, though. Collins has seen almost two decades worth of Skyforce players and coaches rotate in and out of Sioux Falls. He’s seen good teams, bad teams, and everything in between. Some players, however, have stuck with him over the years.

“This might come as a surprise, but a guy named Alexander Johnson is my favorite player of all time,” Collins said. “Back in the CBA days, they really BANGED down low. Today’s game is much more athletic, but not as much of a grind as it used to be. Johnson could catch a ball, hold onto it and make a shot. There is nothing more fun to watch in basketball to me than a big man that can not only score after contact but make the free throws too. Johnson wore teams down. It was fun to watch.”

Collins went on to name a few others, including Corsley Edwards and Jerome Beasley from “back in the day” as well as Derrick Jones Jr. and Duncan Robinson from more recent years. Jones Jr. was a “pleasure to watch fly,” said Collins, while Robinson “has the sweetest stroke in basketball.”

Controlling the mic isn’t all about basketball, though. The Skyforce has prided itself on being a one-stop-shop for family-friendly entertainment. Whether fans are participating in on-court promotions and games throughout the night or watching some of the best halftime acts in the nation, they are sure to have a fun experience. That fun extends to the staff that are involved as well.

“Some of the half-court shot contests have been fun,” said Collins. “Especially when they make it. You also can’t talk about Skyforce games without mentioning the halftime entertainment. People don’t realize that if you come to a Skyforce game you are most likely going to see an act straight from Las Vegas that will blow you away!”

However, Collins enjoys more in life than just radio and basketball, believe it or not. Yet with such a crazy schedule, what does someone in his position enjoy doing in his free time?

“I’m sure some of the Skyforce staff is tired of me talking about bow hunting,” Collins said. “When the season starts back up each November, chances are you can find me carefully studying the schedule to figure out when I can be up in a tree spending some alone time with Mother Nature.”

With a schedule as crazy as Collins’ can be at times, you take whatever chances you get to unwind and spend time doing what you love.

“I’ve actually announced a couple of Skyforce games after hustling back into town after sitting in a tree stand the entire day… and yes, I do like when the Force wears camouflage jerseys,” said Collins.

Collins is just one of the many people who go above and beyond to make the Skyforce basketball experience a pleasant one for all in attendance. He serves as an important link between what’s happening on the court and the fans in attendance.

So, when the Skyforce makes its much-anticipated return next season, pay extra attention to whose voice you’re hearing throughout the night. There’s a very good chance it’s JD Collins, and though he’d never ask for it, he deserves some “major props” for being one of the best in the business year in and year out!