When it comes to working behind the scenes on a Skyforce game night, teamwork is everything. Communication is key. Whether at the scorer’s table, in the press box, or in the control room, each member of the crew plays a pivotal role in providing the best game-night experience for fans. 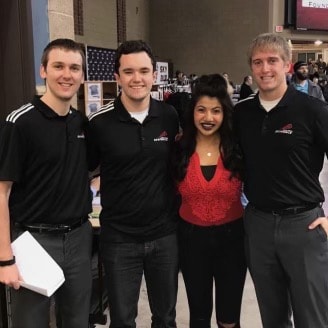 Austin Ewing, who has now served for the Force as Show Control Operator since 2016, is no exception.

So… what does a Show Control Operator do?

Ewing, who began as a graphics design intern his first season and has since moved into an official game-day employee role, is primarily responsible for having the correct graphics, animated graphics, promotional videos, or marketing pieces loaded up and ready to be presented at a moments notice. Ewing’s job, arguably more than anyone else’s, relies heavily on good communication in the control room. 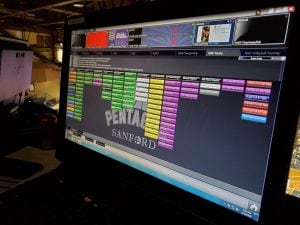 “I think overall, show control is one of the easier parts of running the video board,” said Ewing. “But you still have to be able to work quickly and diligently!”

Video boards have always been an important aspect of a fan’s experience on game nights, but in recent years they have gone from a luxury to a necessity. Fan’s are constantly looking at the board for replays, stats, promotional information, different views of the live game action, and nearly anything else you can think of.

“Sometimes you’ll have to throw up a graphic for a foul, then a graphic for the free throw player, then we might go immediately into an ad read or commercial on the board,” said Ewing. “So it’s being able to listen as well as communicate with the group in the booth so that it all goes flawlessly (or if it doesn’t, fix it quick enough so nobody notices!).” Being flawless, or as Ewing says in some cases “being able to fix things before anyone notices” is what Skyforce fans have come to know and expect. Ewing’s job as Show Control Operator is the true definition of behind-the-scenes, meaning if he’s doing his job to the best of his ability, you probably won’t notice anything out of the ordinary.

If you find yourself immersed into a close game in for fourth quarter, chanting “DE-FENSE” along with flashing videoboard graphic during a key possession, or checking out a player’s stats during a free throw, you can thank Ewing for seamlessly delivering you that experience.

“I would say something I wish more people knew is just how much communication and teamwork goes into the gameday production,” said Ewing. “The little things that an average fan might take for granted while at a game. Everything from ad reads, interactive games with fans, to replays and videos take an immense amount of communication. It’s something I’ve started to appreciate and take note of when I go to other sporting events as well!”

With all that power at his fingertips during nearly every possession of the game, what is Ewing’s favorite part about operating the show control from up in the booth?

“My favorite part for sure has to be using the animated graphics to pump up the crowd,” said Ewing. “Just using a fun graphic after a crazy dunk or ridiculous three-pointer is always fun. Something like using a DE-FENSE graphic to start a chant in the fourth quarter of a close game is always fun and gets me hyped up too!” Ewing is as invested in the Force as a fan just as much as he is as an employee. Hyping up the crowd, using the videoboard and other means to build up momentum throughout the game, all of that is easier to do when you’re engaged yourself.

“Not only that, but when our team upstairs communicates and flawlessly transitions from a motion graphic to a replay, then back to live footage… that’s something that pumps me up too and adds to the overall fan experience.”

Pride in his work. Pride in who he’s working for.

Working’s easy when you’re having fun!

The same phrase applies to Ewing’s day job as well. He works as a graphic designer for Octane Ink, a company that specializes in wraps, screen printing, embroidery, signage and promotional products for businesses in Sioux Falls and the surrounding area. It’s a job, he says, that keeps him on his toes and brings out his best.

“I think my favorite part about my job is just the amount of diversity in the projects that I get to work on, and even in how I get to work on those projects,” said Ewing. “In a single day, I could help a company with a rebrand, print a wrap, apply a logo to a vehicle, take photos of completed projects, and design a layout for a company’s sign.” 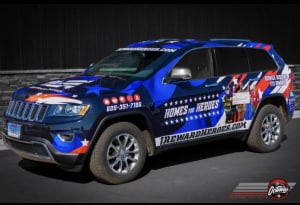 Versatility is a trait that the Miami HEAT look for in all their young prospects. From players on the court to employees in the front office, versatility and adaptability is a major “plus” for anyone the HEAT and the Skyforce bring on. For Ewing, that type of flexibility is just what he’s become used to.

“Every day is something new,” said Ewing. “While some projects are more fun than others, I just really enjoy being able to work on all types of projects, and things I’m passionate about.”

We’ve been from one job to the next. From day to night. Now we’re moving from work to free time. What Ewing enjoys doing when he’s NOT on the clock shouldn’t come as a surprise to you, now knowing he’s a mastermind at multitasking, communicating, and has a wide range of skillsets.

“I like photography,” said Ewing. “That, and I enjoy hanging out with friends, designing sports edits in photoshop, and watching sports! As a fan of most Minnesota sports teams, it’s nice to be able to watch a Skyforce team that’s always pretty competitive as opposed to my Minnesota teams.” 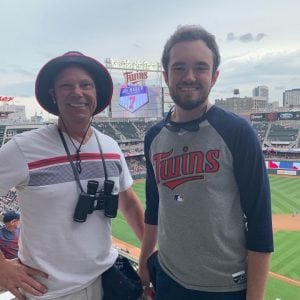 We’ve now fully established that Ewing is just as much a fan of the Force as he is an employee, so in the hundreds of games worked from the control room over the past five seasons, what is Ewing’s favorite part of each home game? What keeps him coming back?

“It would have to be the atmosphere of it all,” said Ewing. “I’m convinced that the Skyforce has one of the best gameday atmospheres in the NBA G League! The Skyforce are not just a developmental team for the Miami HEAT, they are Sioux Falls’ basketball team, and they always put on a show worthy of that title.”

Though we do pay him…we didn’t pay him to say THAT!

“Not only do we get to play on Heritage Court at the Sanford Pentagon, which has to be one of the nicest stadiums in the G League, but it’s just an experience tailored for fans, so it’s always awesome when we can pack the house and get the crowd going.”

No truer words have ever been spoken. The Skyforce organization, along with it’s many game day employees, takes pride in giving its fans the best possible game night experiences. Not just on weekends, but on every night of the year. Having employees as passionate as Ewing, who care about the team’s success, the fan’s experience, and the Sioux Falls community, make it that much easier.

“I think the biggest thing I try to convey to friends and family is that while this is a development league, there is real talent in this league and it makes it so much fun to watch,” said Ewing.

Though Ewing is referencing the players and coaches on the court, many of whom end their seasons on an NBA roster or transition to an NBA staff after each year, this applies to the talent of those working behind the scenes in the G League as well. NBA team’s have similar staff with similar responsibilities, and the gap between those jobs and what game day employees do right here in Sioux Falls is not as wide as you’d think.

“I’ve already talked about how cool it is to be able to watch guys get called up, but being able to see a high profile rookie like Grayson Allen come to town, or to have a 13-year NBA veteran like Jarrett Jack play nearly a full season with the Skyforce is awesome. It’s not something you always get to see when it comes to sports in Sioux Falls.”

As more and more young NBA players cycle through the G League early in their careers, it’s easy to take for granted the amount of talent that can be packed onto the court on any given night. From two-way players and assignees to up-and-coming G League players looking for a call-up, it can be easy to overlook just how close these players and coaches are to the NBA. The sport’s highest level.

Without them, Skyforce basketball as you know it would not exist.