Keith Benson’s game has aged like fine wine. He was dominant last season, posting career-high numbers in points (20.5), rebounds (10.5) and blocks (2.2) per game on his way to recording a league-leading 32 double-doubles on the season.

Another game, another double-double for Keith Benson!

So, what’s the difference between Benson and others atop the NBA G League leader board?

It’s happened to players like Benson before, and it’s even more prevalent now. NBA teams are taking more chances on young players with “high-upside” rather than targeting players who have proven their worth over a number of years. 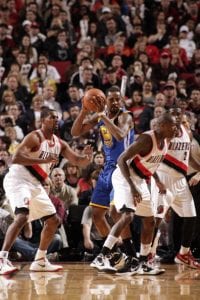 Benson did, however, receive a call-up on March 24, 2012 to the Golden State Warriors during his first stint with the Skyforce. He appeared in just three games for them, and was a different player than he is today.

Presently, Benson’s window of opportunity to make it back to the NBA may be closing sooner rather than later, though his play on the court would say otherwise.

Benson, who recently turned 29 on August 13, hopes to avoid falling through the cracks. He has found his stride over his six seasons as a professional athlete, bouncing between the NBA G League and overseas competition. His experience, he said, played a large role in his breakout season last year.

“I did a lot of work on my body [last] summer, and I think it’s just more experience and being more comfortable,” said Benson in an interview last season. “More minutes obviously plays into it too. I’ve just been focusing on the main things: rebounds and blocks. I think the points will always come, so I’ve just been trying to focus on that. Getting double-doubles… things like that. Trying to be consistent so they know I can do it every night.”

The term “they”, in Benson’s case, carries a double meaning. “They” refers to his opponents, who should expect him to bring his best on any given night. “They” also refers to NBA scouts, to whom he has demonstrated his consistency when given the opportunity over his last two NBA G League All-Star seasons.

A decision looms for Benson in the next couple months. Will an NBA team recognize what he brings to the table? Will he return to the NBA G League and continue to let his game do the talking? Will he cut ties, and head back overseas?

👀 Check out where Keith Benson stands in Skyforce history!