Since Thunder became the mainstay mascot for the Skyforce nearly three decades ago, many different people have donned the furry wolf suit. Some have succeeded, many have failed, but everyone has a story. We caught up with a few of those who have taken on the mantle of being one of Sioux Falls’ favorite mascots to get a glimpse at what Thunder is like from the other side: behind the mask.

Chad Geerdes began as Thunder prior to the 2003-04 season and still suits up on game days today. Now in year 17, we wanted to know what keeps him coming back year after year.

“I think what keeps me coming back is the relationships with the fans that I’ve met over the years,” said Geerdes.

“The people are what keep me coming back, especially the kids. Seeing all of their smiles. I could be having a bad day, but then a little kid comes up to me and his smile brightens my entire day.”

The value of building relationships and connecting with fans seems to be a common thread for all who have worn the suit over the years, but those relationships can be… one-sided. Sioux Falls Mayor Paul Ten Haken brought up what happens when “Thunder” sees fans outside of the arena.

“I was anonymous. I was just a character to them. I would run into a few season ticket holders in the mall or some other place and say, ‘Hey! How are you?’ and they’d look at me like they had no idea who I was. I’d have to explain, ‘No, I’m Thunder!’ and we’d share some laughs. You form these relationships with all of these fans over the years but then you’d meet them in the street, and they’d have no idea that it was you.”

That anonymity, though, is what kept Ten Haken coming back.

“Anybody who knows me well knows that I love people and that I love having fun,” said Ten Haken.

“There’s no better job for someone who is a jokester than to be a mascot because you get to do it anonymously. I got to mess with people and prank them. I got to know the season ticket holders really well but they never knew who I was.”

Being a mascot isn’t always fun and games, though. There are times when it can be physically taxing, dangerous, and even overwhelming being stuck in a thick fur suit for hours at a time. Thunder has been asked to rappel from the ceiling of the Sioux Falls Arena, do back flips off of trampolines, climb up onto and stand on the rims of the basketball hoops during quarter breaks. It can be a lot of fun, but it’s important to keep perspective.

“J & L Harley was a big sponsor for many years, and we got to drive a Harley Davidson [motorcycle] out onto the court,” explained Ten Haken. “I started to get really comfortable driving this Harley… One game, I gave it too much gas and I was flying towards the front row of fans. My hand got stuck with the big Thunder mitten I was wearing, and I thought I was going to crash right into the front row. I gave it the brakes and I stopped, but I took a bunch of wax off the floor.” 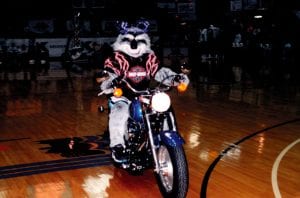 Fans thought it was hilarious, as most unassuming crowd members would. Thunder was just being Thunder, but in reality it was much more than a game or an on-court promotion.

“They thought I was just being cocky or funny, but deep down I was really freaking out,” said Ten Haken. “That made me realize that even though it’s horsing around and its fun, you still have to be really serious whether its rappelling down from the ceiling, riding a motorcycle, it’s kind of a dangerous thing.”

Ten Haken wasn’t the only one to face danger during his time as Thunder. Brad Coleman, now Senior Public Affairs Specialist at Sanford Health, was the last Thunder to be allowed to rappel from the ceiling at the Sioux Falls Arena.

“I had an absolute gas doing that,” said Coleman. “It scared the tar out of me the first time I did it, but I got to a point where I was super comfortable. We did an opening skit where we rappelled [from the ceiling], but we free-fell first. We free-fell above the crowd and then our harness caught and we swung until we stopped, then we lowered ourselves down to the court. I remember when we practiced, I was scared to death. I screamed the entire time, but after I did it I thought ‘wow, that was fun.’ So obviously we did it again and again.”

The difficulties of being Thunder aren’t always death defying or life threatening, though. As Geerdes pointed out, it can be difficult to stay on everyone’s good side at times.

“Sometimes you can’t make everyone happy,” said Geerdes. “Everyone loves you when you’re throwing things out to the crowd, but pretty soon you have kids that don’t like you because you didn’t throw anything to them. It can be tough, sometimes, to make sure you’re everyone’s hero…to stay on fans’ good side.” 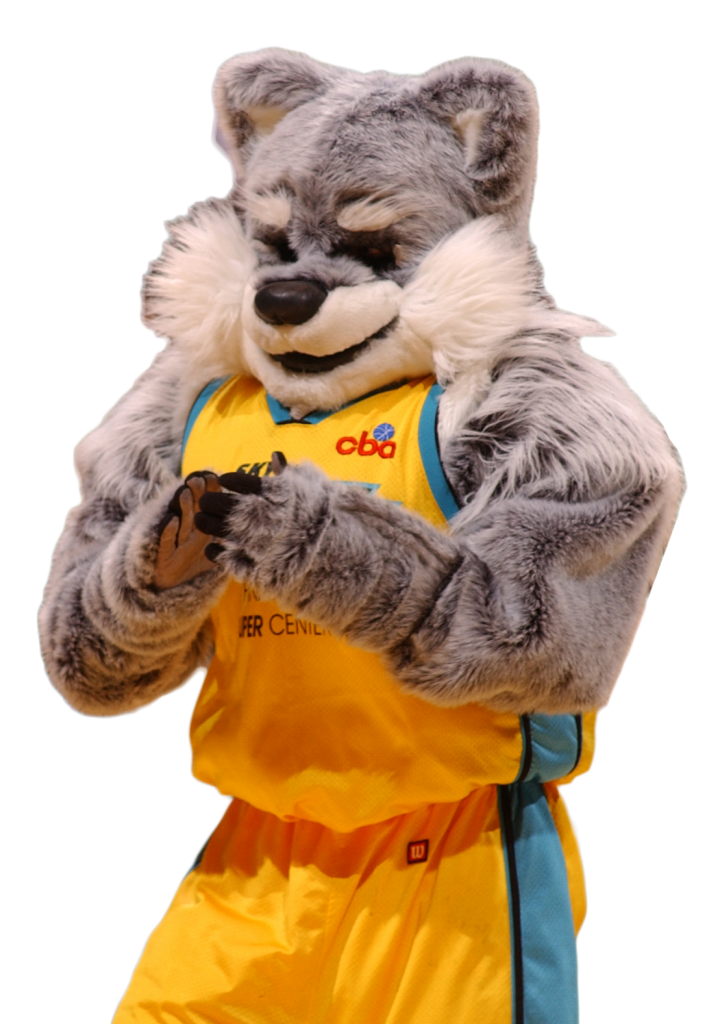 For Geerdes, the benefits of being Thunder have far outweighed the potential pitfalls. His daughter, Taylor, has gotten into the business of mascotting as well and has performed alongside him many times as Thund-Air or Thund-Air Son. Spending that extra time with his daughter, Geerdes says, has been the best part.

The NBA G League can be unpredictable. With players coming and going throughout the season, wins and losses are becoming harder and harder to guarantee year after year. Thunder, on the other hand, has been bringing smiles to fans’ faces for nearly 30 years, and he’s not going anywhere.

“Professional athletics is entertainment,” said Coleman. “That’s the way I looked at it.”

“It was my job to entertain the people that weren’t super focused on basketball. They just wanted to be entertained, so that was my job and I had a blast doing it.”