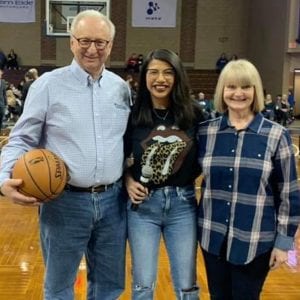 What’s your favorite thing about being a Skyforce season ticket holder?
“The players that come through Sioux Falls and their background. Every team that comes in, you get to know the Skyforce players and all of that stuff and what colleges they went to, but with the amount of players that come through… Boom. A couple of weeks later you see them playing in an NBA game. We have a little group of long-time fans, Kurt Melton is one of them. We’ll chew the fat a little bit and he’ll always give me some insight on ‘such-and-such guy is here tonight’ and with your program and getting to know their background, it just makes it that much more interesting. Here they are in Sioux Falls. The entertainment is great, don’t get me wrong, it’s all part of the show and then you see some of these same acts at NBA games as well. They’re coming through here too. It’s pretty cool how close our league is to the NBA.”

Who do you attend games with most often?
“My wife, Cecile, and we like to go together. It’s our night out. We’ll get dinner before and dress up a little bit and that’s a basketball culture she and I are both used to from the small towns in South Dakota where we’re from.”

What’s your most memorable Skyforce experience?
“Victor Page and his Christmas mop. That’s a pretty big one. The other one would be when we won the [2016 NBA G League] Championship. The whole crew that year was just absolutely special. We were at both games and we saw them win it on our home court and that had never happened before. That was really cool having ESPN there and all of those types of things.”

Who is your favorite Skyforce player or coach?
One of my favorites was Jarnell Stokes. We had all kinds of talent on that team, but he won that championship for us. My other favorite would be our coach that year, Dan Craig. He got those players together and we sat right above the bench. Dan didn’t talk a whole lot, but what he said had a real impact. When he spoke, the players responded. Sometimes he’d just let the guys sit there and wouldn’t say anything. I really enjoyed Dan and of course he’s sitting on the bench in Miami. He could be a head coach at any time as far as I know. You’ve got to have a lot of things to win a championship when it’s that competitive. His statement in the locker room was, ‘nobody is going to give this to you, you’ve got to go out and get it. Once you get it, nobody can ever take it away. That’s why you have to fight so hard.’ I thought that was a great way of saying it. That was pretty cool.”