A little more than a few weeks ago, former Skyforce Head Coach Pat Delany joined coach Steve Clifford and his staff in Orlando after both had spent the last four seasons with the Charlotte Hornets. The move has been both exciting and challenging, but Delany hasn’t had much time to think about it, as he was named Head Coach of the Orlando Magic Summer League squad in Las Vegas.

“Right now, the transition is an exciting time,” said Delany. “Anytime somebody relocates, there’s obviously a lot of stress behind it and whatnot in terms of getting situated and getting your feet under you. I’m a big routine person. I’ve always been that way. Not having that routine right now, and with my family still in Charlotte for the time being, it can be tough. But again, if you look at the big picture, it’s a really exciting time. It’s a new opportunity. A new challenge. Obviously I’m grateful for the opportunity to stay on with Coach Cliff and join this organization here in Orlando.”

With the MGM Resorts NBA Summer League now underway, Delany has been faced with both delving into coaching an entirely new group of athletes, all while trying to help his family make the transition from Charlotte to Orlando. The move, Delany says, has been made easier by the overwhelming support that the Magic organization has provided.

“I’ve been totally engraved in that over the last few weeks, watching film, developing practice plans, all while trying to get to know the guys a little bit,” said Delany. “My emphasis right now has just been to get into this stuff and also help my family relocate with the kids in school and stuff. From the organization’s standpoint they’ve been nothing but helpful in the process. They’ve been supportive and have made it seamless. When you get that type of support it makes it easier for not only myself but for my family too.”

The on-court product has been an early success for Delany’s young Magic squad, as they won their first game against the Booklyn Nets 86-80 behind 20 points and seven rebounds from second-year forward Jonathan Isaac. As they look to continue their success, Summer League is more about developing a new culture and building relationships with a new team. For Delany, he is all-too familiar with the type of culture coach Clifford demands, and appreciates the relationship they’ve been able to build over the last few years.

“My relationship with Coach Cliff actually goes well before my time in Charlotte, but I think our time in Charlotte really helped it grow,” said Delany. “Anytime you work that closely with somebody it’s bound to happen. I’ve actually known Cliff since my college days. He was a former assistant to a coach that I played for before I got there. I had heard a lot of stories about him as a coach, and as a player himself. The biggest thing I always heard about was the type of person he was. When I had the opportunity to leave Sioux Falls and Miami for an interview with him, he was somebody that gave me his number and said, ‘Hey, call me up anytime if I can ever help you. I’d be more than happy to.’ So that’s how that relationship started. Then going forward I knew how busy he was, but whenever I called or texted or saw him in person he would always take the time to respond to me and make sure he said hello to me.”

One does not easily and readily leave the Miami HEAT system, so making the choice to join Clifford and his staff in Charlotte after the 2013-14 season in Sioux Falls was a difficult one for Delany, but one that he is grateful for nonetheless. 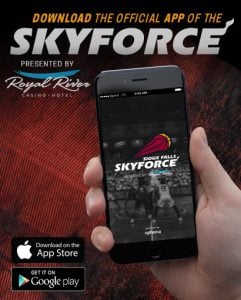 “It was a really hard decision to leave Sioux Falls and the HEAT organization I had been with for so long,” said Delany. “But that relationship with Coach Clifford made it an easier transition for me, knowing the type of person he was, who he was as a coach, and the job he had done in his first year with the Hornets.”

There have been few coaches over the years that have genuinely enjoyed their time in Sioux Falls as much as Delany did, and he’ll ready speak to it when asked about it. To whoever will listen, he’ll readily describe his first-rate experience while coaching in the NBA G League, which offers a good testimony for others that may have the opportunity in the future.

“I honestly was spoiled, from the standpoint of coaching in the NBA G League, in all avenues of my time there,” said Delany. “When I got an opportunity to meet with both Mike [Heineman] and Jeremy [DeCurtins] during the NBA Summer League in Orlando the year prior, from that point on I knew if I ever got the opportunity to be the head coach of the Skyforce, if the HEAT ever gave me that position, it was going to be an awesome experience for me. In all capacities, from head coaching, to living there, to learning the business side and working for a family-run organization like the Heinemans have established, having a brand new facility in the Sanford Pentagon, and having the best fan base in the league… It was an all-around learning experience for me, but it was a fun one that I’ll always reflect upon with people here in the NBA.”

While some may think of moving from being an NBA assistant to the head coach of an NBA G League team as a downgrade, Delany insists it was a vital part of his coaching experience, and helped him grown in more ways than he can count. He will, and has, advocated for the importance of gaining that coaching experience regardless of the position one might fill.

“I absolutely would advocate for coaching in the NBA G League,” Delany said. “Especially considering where the G League is now, it’s becoming harder and harder to get one of those jobs. Whether it’s a head coaching job or an assistant position. I have numerous people a year that I either cross paths with or contact me saying, ‘Hey, I want to be a coach, how do I get in?’ I always tell them, be willing to do any and everything you’re asked to do, and be willing to do it at any level.”

It seems as though nobody’s ultimate dream job is to serve as the head coach for an NBA G League team in Sioux Falls. Everybody wants to coach or play at the sport’s highest level in the NBA. However, as Delany suggests, jobs are few and far between in the Association. That’s why, when anyone asks, he tells them to start at whatever level they can and work their way up. Coaching in the NBA G League is becoming an elite opportunity, and shouldn’t be taken lightly.

“Everybody would love to work for an NBA team, but there’s only 30 of them,” said Delany. “At the end of the day the G League opens up a lot of those opportunities. I include myself in that…it makes you a better coach, a better person. It gives you a better understanding of the game, how to read your players, the communication part of it. There’s so many different things, it’s not just the X’s and O’s. Having a relationship with the Skyforce front office, and knowing all of the stuff that goes on behind the scenes at that level, it’s the same thing that happens at the NBA. Everyone is always grinding and ready to take on any task. The Heineman family is a perfect example of that work model.”

As Delany now looks forward to how he can maximize the talents of young Orlando Magic players prior to the team’s training camp and 2018-19 season. He’s got the blueprint laid out, he’s excited, and is thankful for the opportunity to develop a hard-working group. This year’s NBA Summer League success will not only be hinged on wins and losses, but by how well the players and coaching staff can come together to establish a new look, and a new culture in Orlando.

“I think the biggest thing is about our core guys. The Magic players that are going to be playing for us this season,” said Delany. “To make sure that everybody is organized to make sure everybody on the roster is comfortable with each other. Seeing some of our young guys here over the last few weeks has helped me learn how we want to utilize them and how we want to see them play. At the end of the day, it’s always about developing players and seeing what they’ve learned. It’s really fast-tracked. Quick teaching. Not as many details. With that, you also see players that have a very high IQ in how they pick things up and are able to carry them over onto the court in live situations. Obviously I’m grateful to Coach Clifford and the organization for allowing me to do this. I just want us to continue to get better whether its practice, drills, a game. I want to see our guys progress and then take advantage of their opportunities to show that.”

Despite limited preparation time, Delany has already taken advantage of the time he’s gotten with his players, and will look to continue the team’s success when they take on the Memphis Grizzlies tonight at 8:30PM CT on ESPN2.