Kelsey Buchholz is that steadying hand. The “glue” of the Skyforce broadcast team. As TriCast Director, she’s often the one preparing the camera equipment, troubleshooting problems in real time, picking and choosing which camera angles to use and what audio is heard. Buchholz takes many different aspects of a Skyforce game night experience and forms them into a near-perfect puzzle for viewers who are not able to attend in person on game nights.

As an organization, some employees just make your life easier. Buchholz is one of those employees, and has been since she first started as an intern during the 2007-08 season, when providing an online viewing option first became a reality for the NBA G League.

“I started out as a Fan Relations and Merchandise intern during my senior year at Augustana University here in Sioux Falls,” said Buchholz. “That year, the NBA wanted to be able to broadcast and highlight [G League] games, and the Skyforce asked if I would slip into that role.”

Luckily for both sides, she agreed.

“It has been an opportunistic and pleasant cross between the evolution of the job and my interests and skillsets,” said Buchholz. “I’ve been broadcasting with the Skyforce since 2007 and haven’t looked back. I love it!”

Originally a communications major at Augustana, it was Buchholz’ love of sports that initially led her to the Skyforce as an intern. Her degree and her day job, however, led her in a different direction.

“My ‘real job’ is as a high school English and Communications teacher,” said Buchholz. “I really enjoy working with teenagers, helping them not only improve academically, but find passions and interests that can possibly become future careers. By working in a small town, I get to know the students well in and out of the classroom.”

A general love for people, and a desire to help others achieve success, is a common thread among many important game night employees with the Skyforce. Buchholz is no exception. Though livestream broadcasting may seem like a curveball in comparison to her passion for teaching and for her students, there are more similarities than you might think. Above all, Buchholz says, it’s the people she works alongside that keep her coming back every year.

“It’s definitely the people,” said Buchholz. “I work with people who are just as passionate and excited about their jobs as I am. We all love the Force, are invested in the team, and take pride in our jobs. We all want to put the best production together every night.”

After 13 seasons of fine tuning, Buchholz and her camera crew have not only become a well-oiled machine that puts out a quality product every night, but have become friends with one another as well. That type of connection enhances nearly every aspect of the game night experience. 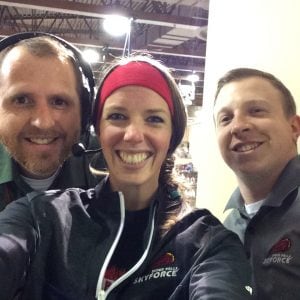 “I really love what I do and who I work with,” said Buchholz. “I am a sports fanatic, so being able to work in the sports world with other people who are just as spirited as I am makes it easy to come back time and time again. I have made some really great friendships because of this opportunity and am thankful that I have been able to continue this job over the years.”

Though Skyforce games offer Buchholz a chance to get her “sports fix” over the course of the season, her involvement in sports doesn’t stop there. She also serves as an assistant coach on both the volleyball and golf team, as well as supervises the yearbook and school newspaper.

Sports, in fact, is a shared passion in her household.

“I have three boys who dominate a lot of my free time, but I wouldn’t want it any other way,” said Buchholz. “We are all really into sports, and cheering on our favorite teams: the Minnesota Twins, the Minnesota Timberwolves, the Miami HEAT (obviously), and the Skyforce.” 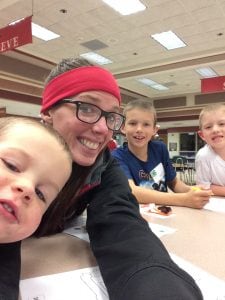 Between working at Skyforce games, cheering on her favorite teams, watching her kids play various sports, coaching, playing games, reading, and going for hikes, Buchholz life seems to be just as fast paced as an NBA G League game.

As mentioned, Buchholz experience with the Skyforce is much more than just a job. It’s a passion. One that has led her to become a fan of not just one Skyforce player over the years, but many. So many, in fact, that it was hard for her to narrow down the list when asked who her favorite player might be.

“I honestly don’t think I can choose,” said Buchholz. “There’s usually a new favorite every year, but a few that stick out to me are Raymond Sykes, Keith Benson, Kadeem Jack, Yante Maten, and Marcus Lee. I’m probably forgetting some, but those are the ones that come to mind right now.”

Buchholz not only listed names, but had specific reasons for why she loved each player mentioned.
Raymond Sykes because of his nasty dunks.
Keith Benson because of his hard work and block mastery.
Kadeem Jack because of his relentless hustle on both ends of the floor.
Yante Maten because he seemed to truly love the game, and enjoyed playing and making those around him better.
Marcus Lee because of his great attitude, his difference making on the court, and the team player that he was all around.

To say that Buchholz is “invested” in the Skyforce would be an understatement, which made it that much sweeter when she was able to be a part of the 2015-16 NBA G League Championship season put together under then-Head Coach Dan Craig.

“It’s so hard to pick [a favorite memory], but the 2015-16 season in general was pretty amazing,” said Buchholz. “From the solid season the team put together to the culminating championship, that was a really exciting season to be a part of.”

Next time you tune into a Skyforce livestream, whether on the NBA G League website, Twitch, ESPN+ or a new platform during the 2021-22 G League season, take a second to appreciate who’s putting the puzzle together behind the scenes.

“The Skyforce is a wonderful organization to work for,” said Buchholz. “They truly treat you like family. I’ve completed 13 seasons with the Force and am definitely ready for number 14.”